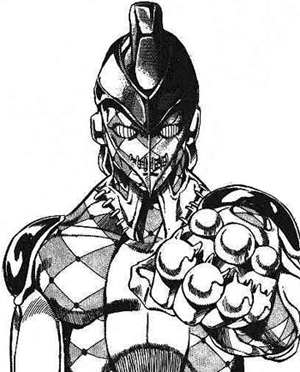 Honda was best known for his bad-as-shit samurai helmet, which, aside from generally looking totally fucking awesome, was adorned with gigantic stag's antlers that stuck up out the top of the helm and looked pretty much as badass as deer antlers can possibly look (which, evidently, is more badass than you might think).
—Badass of the Week, on Honda Tadakatsu's helmet

Helmets of all shapes and sizes.

One thing that makes a helmet cool is a crest of almost any shape and size on it. History is full of Cool Helmets, from the Greek Chalcidian helmet worn by Hoplite to the Roman gladiators' ornate helmets to Japanese Kabuto to the German Pickelhaube. These helmets influenced the designs of various other helmets across medias.

A villain in a Cool Helmet might be a nerd underneath.

A Sub-Trope of Nice Hat.

A Sister Trope to Cool Crown.

Examples of Cool Helmet include: