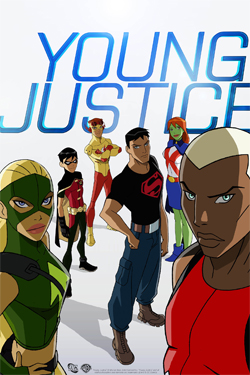 Young Justice is an animated television series based on DC Comics, created by Greg Weisman (Gargoyles, The Spectacular Spider-Man, WITCH) and Brandon Vietti (Batman: Under the Red Hood, Superman: Doomsday, The Batman), produced by DC Entertainment and Warner Bros Animation, and distributed by Cartoon Network.

The first season follows a group of teenaged superheroes -- Robin (Jesse McCartney), Aqualad (Khary Payton), Kid Flash (Jason Spisak), Superboy (Nolan North) and Miss Martian (Danica McKellar), later joined by Artemis (Stephanie Lemelin), Zatanna (Lacey Chabert), and Rocket (Kali Troy) -- who are members of a covert operation team under the authority of the Justice League. The Team and the League battle a cabal of supervillains known as "The Light" and its minions, though the Light goes to great lengths to make sure the heroes never discover they exist as a single organization.

The second season is set five years later with an expanded Team of old and new members. The now-adult Robin, now known as Nightwing, is still on the Team as leader and mentor to the junior members -- the new Robin, Wonder Girl, Beast Boy, Lagoon Boy, Blue Beetle and others. Superboy and Miss Martian also remain as mentors, while other members have left the team, some to join the League itself.

Despite sharing the title, it is not an direct adaptation of the comic book series of the same name created by Peter David, and the storyline with The Light is original to the show. However, it does draw material from Young Justice, Teen Titans and other DC Comics series, and David is one of the scriptwriters.

The series is set in a "young DC Universe", Earth-16 of the DC Multiverse, during an era informally dubbed by the Powers That Be as the New Age of Heroes. While the series follows an episodic format, there are multiple subplots and overall story arcs weaved throughout the episodes. Though the Team's missions are the main focus, their personal lives at home and school are explored as well. The series makes use of many, many characters from the wider DC Universe as the supporting cast, including characters which had never previously been animated.

The first two episodes were released as a special preview in November 2010. The series properly debuted in January 2011, but it underwent several delays and hiatuses over the year. Starting March 3rd, 2012, the show began airing again as part of Cartoon Network's new DC Nation block. The first season concluded on April 21. The show was renewed for a second season which started airing on April 28, and retitled Young Justice: Invasion. The series was cancelled by Cartoon Network in 2013 but due to a strong fan campaign and high viewership-ratings on Netflix, the series was officially renewed for a third season titled Young Justice: Outsiders by Warner Bros in November 2016 and start airing in 2018 on DC's new digital platform for a total amount of 26 episodes.

Has a Recap page and, in the grand tradition of the internet, the show has its own Wiki.

Tropes used in Young Justice (animation) include:
Retrieved from "https://allthetropes.org/w/index.php?title=Young_Justice_(animation)&oldid=1879214"
Categories:
Cookies help us deliver our services. By using our services, you agree to our use of cookies.