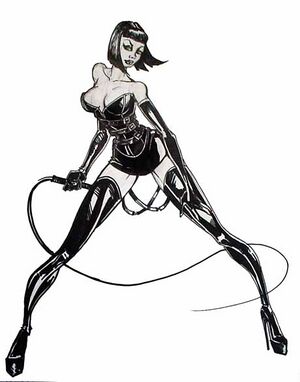 This concept is much Older Than They Think, possibly even Older Than Dirt. Known possible examples date back to Mesopotamia, involving rituals of the goddess Inanna (or Ishtar as she was known in Akkadian); ancient cuneiform texts consisting of "Hymns to Inanna" suggest that these ritual involved powerful females displaying dominating behaviors and forcing men into submission to them. The same text also suggests myths where Inanna did the same to her fellow gods.

Retrieved from "https://allthetropes.org/w/index.php?title=Dominatrix&oldid=1894654"
Categories:
Cookies help us deliver our services. By using our services, you agree to our use of cookies.