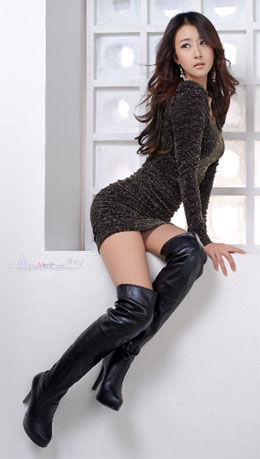 Won't your thighs get cold?

Shoes, usually boots, which rise knee-high or higher, often giving them Zettai Ryouiki appeal, and qualifying under its grades. These kinds of shoes have a certain Impossibly Cool Clothes factor because it is pretty uncommon, and usually pretty impractical and expensive, for shoes to reach any higher than calf length. These shoes may have straps, buckles, zippers or laces that may go all the way up, to emphasize their length and the fact that the character wearing them has some sexy legs.

Nicknamed Go-Go Boots, Thigh-High Boots tend to double as Combat Stilettos on Action Girls, though Dominatrices and Real Life prostitutes wear these rather liberally, qualifying the latter as the Ur Example, and the former as the Trope Codifier.

Compare Zettai Ryouiki and Nice Shoes—this is a subtrope of both. See Opera Gloves for the upper-limb equivalent.

Examples of Thigh-High Boots include:

Retrieved from "https://allthetropes.org/w/index.php?title=Thigh-High_Boots&oldid=1903574"
Categories:
Cookies help us deliver our services. By using our services, you agree to our use of cookies.