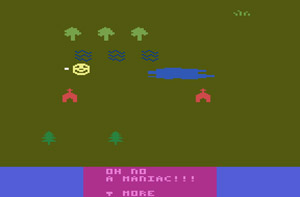 The only true Role-Playing Game for the Atari 2600, and considered one of the console's best games. Dragonstomper is a Starpath Supercharger game on cassette, released in 1982. Written by Stephen Landrum.

You must save the kingdom from a dragon by taking an amulet in its possession. Your Player Character has two stats: STR (Strength, or Hit Points) and DEX (Dexterity, or Armor Class). There are no Experience Points or Character Levels, but you can raise or lower these stats with certain items.

You start in The Enchanted Countryside, where you wander around and face a relentless barrage of Random Encounters. You can also seek out encounters in the castles, huts, trees, swamps and grass. Combat is turn-based. You gather gold and items from the monsters. You can also find items in one of the castles, the churches and the temples. Strength recovers with time, or you can heal yourself quickly in the churches. Each item does something: some help you, some hurt you. When you think you have enough gold and items, you need to get past the bridge guard to the Oppressed Village. The easiest way is with an ID paper, found in a glowing castle.

Once you're in the village, you'll see three shops: the Trade Shop, the Magic Shop and the Hospital. Sell off your items from the countryside, and buy the items you'll need to take on the dragon. You'll also see three warriors, who you can hire to help you fight the dragon. And finally, you'll see the entrance to the Dragon's Cave. Enter whenever you think you're ready.

The cave is a vertically scrolling corridor filled with traps and the bones of previous adventurers. Use the spells you bought from the Magic Shop to reveal the invisible traps, and dodge your way through the poison darts bouncing back and forth. If you get hurt, you can Heal Thyself with medicines from the Hospital. Use a chain or rope from the Trade Shop to lower yourself down into the dragon's pit.

The dragon is a huge sprite in the center of the screen: you're at the bottom, and the amulet is at the top, behind a force field. The dragon will start advancing towards you. Theoretically, you can use an Unlock spell from the Magic Shop to open the force field: as soon as you touch the amulet, you've won, even if the dragon is still alive. But in practice, there's no way you can get past the dragon, so you have to fight him. Release your warriors, use Stun and Blast spells, shoot him with a bow and arrow, and if he reaches you, defend yourself with Protect spells and slash away.

The game actually doesn't end if you kill the dragon, you still have to touch the amulet. Once you do, the screen flashes and the song "Rule, Britannia!" plays.