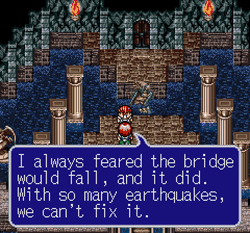 Couldn't I just hop across?

An obstacle, frequently a broken bridge, that prevents you from progressing to the next Adventure Town and advancing the plot further. Once this plot advancement has occurred, the bridge is fixed.

This is often a method of "Railroading", as it allows the game designers or GMs of Tabletop RPGs to follow a specific path until the plot has reached the desired point.

Not necessarily a literal bridge—the trope applies to any random obstacle that exists just to keep you from going Off the Rails. Some of the more common non-bridge examples:

If you're lucky, the removal of the Broken Bridge will logically follow from solving the Fetch Quest (i.e., the person who removes it will be the one you helped in the Fetch Quest), but many game designers aren't that devoted. Often the Fetch Quest is just a Solve the Soup Cans puzzle, and the Broken Bridge just happens to be solved independently while you're off retrieving the girl's necklace or whatever. Another logical solution is to use The Great Repair on a damaged transport.

If the heroes go off to fix the bridge, there may be villains to defeat or some plot twist revealed.

Tool used by designers to keep you on the One True Sequence. Event Flags are how they implement this. A poorly-designed Broken Bridge (from a mechanical standpoint) will often be the victim of clever gamers. Don't go crying if there's an Empty Room Psych on the other side though.

See also Insurmountable Waist-Height Fence. Border Patrol is a variant on the "impossibly strong enemy" idea mentioned above. In mythology, a similar concept is called Threshold Guardians and finally the Beef Gate for when the threshold in question can be overcome if your character(s) have become strong/skilled enough to overcome the aforementioned threshold.

While they both use monsters, Beef Gates are different in that a Beef Gate could be beaten by level grinding, skilled play, or exploits. If the monster is made of invincibility until the plot says otherwise, it's a Broken Bridge.

If something appears to be a Broken Bridge, but never actually lets you by at any point in the game, see Missing Secret.

If a broken bridge or other obstacle prevents you from returning to earlier areas, it's a Point of No Return.

Examples of Broken Bridge include:

Note that the looping three day time also meant that the time variant is averted on most occasions (whereas Ocarina just had a select few instances). When the blacksmith tells you your sword will be ready tomorrow morning, he means it; just skip time to tomorrow and it's all primed and ready.

In fact Majora's Mask is worse on this matter than just that. You want to go the Swamp? Just dandy! Wanna go to the mountains? Well you have to shoot down an icicle with an arrow (found in the swamp) that breaks the ice blocking your path. You wanna to go the beach? Well you're going to need a horse (which can only be gotten by going to the mountains to get a big enough bomb to unclog the path) to jump over a fence. Wanna go to the canyon? Get ready to write this one down. You're gonna need to find the horse to hop over fences, then ditch the horse and use the hookshot to get past a cliffside, and then, here's the kicker, use ice arrows to freeze octoroks so you can cross the river. (Fortunately, as with OoT, when you reach a new area you can learn a warp song that flies you back as often as you want.)

In the first case, if you save and quit at the wrong time after the bridge is stolen, you will be reloaded on the wrong side of the bridge, making the game Unwinnable, as all other paths are blocked by indestructible barriers or other broken bridges at this point.

An interesting example is the broken staircase that leads to Orochi's lair. Amaterasu must travel through a set of caves as an alternate way to reach Orochi. The interesting part is that, much later on, Amaterasu winds up traveling back in time to before the staircase was destroyed and uses it to confront Orochi again, this time without getting sidetracked.

Owen: "Why is it that wherever we go, we always find large pits to cross?

Episode Two also features a literal broken bridge, near the end of "Freeman Pontifex"; it's not otherwise an example of the trope, though, since the bridge's only relevance to the plot is that the player has to retrieve a car from the other side of it and jump (in the car) back.

Another Broken Bridge is inside Waterloo World. You have to get a carpenter to fix it before moving your pieces across.

"I've found that the elevator business is one of my most profitable... behind bridges of course."

contains a literal broken bridge in 600 A.D. that will only be completed once the Reptite Village in 65,000,000 B.C. is saved from the Archeofangs.

Parodied in Eight Bit Theater, where the the Light Warriors decide that "King Steve's Kickass Bridge" is an incredibly sucky reward for saving a princess.

In a strange case, if the buggy breaks down and you don't talk to the guy, it will magically be fixed. If you enter Cosmo Canyon willingly, the buggy never breaks down, but the same guy will offer to fix it for you!

Goombella: "There's a guy like this in every town, huh? If there weren't, you'd go wherever you want and beat the game so fast... Hee hee! Never mind. Let's never speak of it again.."