Our Dragons Are Different 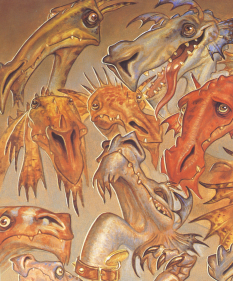 And these are just the ones dredged out of the local swamp.

Nearly every culture has myths about something called a 'dragon', despite the fact none of them can agree on exactly what dragons are. How big are they? What do they look like? How many heads do they have? Do they breathe fire? Or ice? Do they fly (and if so, with or without wings)? How many legs do they have? Are they dumb as planks, or superintelligent? Are they low scaly pests, or ultra-rare Uber-serpents ancient and powerful as the Earth itself?

And most importantly, do they think we taste good with ketchup?!?

The answers to these questions generally fall within two traditions, "Western" and "Eastern". Even then, in addition to cultural differences, dragons fall into a very wide range of types even in one local mythology.

Eastern dragons come from different traditions and as such aren't technically the same dragon as their Western counterparts; Westerners who encountered stories and images of Chinese lóng and Japanese tatsu (better known as ryuu) sprung on the similarities to the European dragon and couldn't think of anything better to call them.

Even within these traditions, however, there is much variability. This has increased in modern times, as Western and Eastern authors have blurred the traditions by mixing and matching attributes from both (benign Western dragons are quite popular these days, for instance). Some authors invent completely new attributes to set their dragons apart from the crowd or just make them cooler.

Western dragons physical variability has created a number of named sub-species. The most popular variation recently has been the wyvern, a dragon with a somewhat birdlike configuration: the forelimbs are bat-like wings and the rear limbs are their two legs. In some settings, all dragons are wyverns (some writers evidently prefer realistic flying, fire-breathing Uber-serpents). In other settings, wyverns are not considered "true" dragons at all, but a related, usually less powerful and intelligent species. Wyverns, when they are treated separately from dragons, often lack a breath weapon, but they often have a poisonous stinger in their tails and viper-like fangs. The most common type that are associated with dragons are from films are Vermithrax Pejorative from Dragonslayer and the dragons from Reign of Fire.

Rivaling the wyvern is the Hydra from Greek Mythology, which is often depicted as a flightless dragon-like water or swamp beast with one or more heads; for each head you cut off, two rapidly grow to replace it. If they have a Breath Weapon, it's often a different one for each head. The original sprayed poison and had poison for blood.

Very old (Greek and Roman, and some medieval) dragons are presented as more serpentine than the more recent ones—if winged, the wings are usually their only limbs; and some were totally limbless, just *very enormous* serpents. This type of dragon may be referred to as a wyrm (pronounced just like "worm"). Some do have legs as well as wings, and walk similar to a bat, hunched over and using the wings as arms.

Other reptilian or reptile/avian mixed mythological creatures, particularly the Basilisk, Cockatrice and Quetzalcoatl, may be considered types of dragons or similar creatures in some works.

A more recent trend has been to try and make dragons that could actually exist in the real world. Naturally, these tend to either use Science Fiction concepts or be very different from traditional dragons. Also common in later works is a tendency for dragons to form a life-long bond with any human or humanoid who is present when they hatch (probably inspired by the 'imprinting' which occurs with most birds in Real Life, which is why birds raised in captivity with the intent to be released must be cared for by puppets). This gives writers a way to give dragons unique psychology without having to come up with unique motivations for them. It also explains why humanoid Dragon Riders can boss them around. Yet another trend appearing here and there is for dragons to be depicted as looking similar to dinosaurs, usually the bigger theropods (like Tyrannosaurus Rex), but occasionally sauropods (such as Brachiosaurus) as well. The two are often outright confused with each other. Another common trend in modern fantasy is the miniature pet dragon, suitable for perching on one's shoulder.

You'd think regular old dragons were boring or something!

Not to be confused with The Dragon, a position only sometimes held by a real dragon (while dragons themselves can just as easily be Big Bads).

Examples of Our Dragons Are Different are listed on these subpages:
Retrieved from "https://allthetropes.org/w/index.php?title=Our_Dragons_Are_Different&oldid=1961432"
Categories:
Cookies help us deliver our services. By using our services, you agree to our use of cookies.