Jump to content
Everything About Fiction You Never Wanted to Know.
/wiki/Euripidescreator 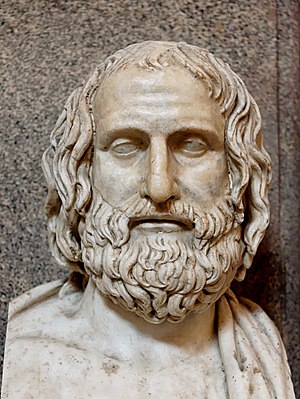 Bust of Euripides at the Vatican Museums.

Euripides was a playwright of Ancient Greece (5th century BC), one of three great tragedians whose works have survived to the present day (the earlier two are Aeschylus and Sophocles). A whopping eighteen of his plays have survived complete (many via a remarkably-preserved 800-year-old copy of The Complete Works of Euripides -- Volume 2: E-K), along with fragments of many others. One of these, The Cyclops, is a Satyr Play about Polyphemus.

His works are noted for having subtler and more realistic characterization than his predecessors, and for playing with the established tropes of Greek tragedy. On the other hand, Friedrich Nietzsche condemns Euripides for being in thrall to Socrates and Plato's philosophy, saying that Euripides "killed" tragedy by infusing it with reason and philosophical ideas.

Any discussion of Euripides has to make note of the fact that he had a Love It or Hate It reputation during his day. Euripides was well aware of the constraints placed upon playwrights at the time, and many of his plays attempted to subvert at least one of the Aristotelian conventions. Today, however, some scholars regard him as the best of the three surviving Greek playwrights and several regard him as the Shakespeare of Athens.

Extant works include:
Works by Euripides with their own trope pages include:
Euripides provides examples of the following tropes:
Retrieved from "https://allthetropes.org/w/index.php?title=Euripides&oldid=1729422"
Categories:
Cookies help us deliver our services. By using our services, you agree to our use of cookies.