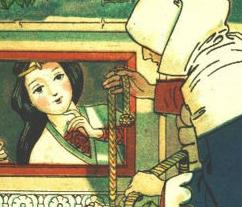 The Wicked Stepmother, the woman hostile to her stepchildren, is a perennial trope. Older Than Feudalism, she appears constantly in legends and folklore around the world. She seldom appears played straight in modern works, except when they are retelling Fairy Tales, but the number of retold fairy tales (especially "Cinderella", "Snow White", and "Hansel and Gretel") gives her a number of straight appearances. Many psychologists hypothesize that she is an Archetypal Character, devised by children to contain all they hate in their mothers so they can continue to regard Mother as perfect. Sadly enough, Truth in Television; children are vastly more likely to abused by stepparents (and people cohabiting with the parent are even worse). For any or all of these reasons, even decades (centuries?) of subversion have not tranformed her even into a Discredited Trope; she can still be played straight or subverted. Shout Outs are commonplace whenever dealing with a stepfamily.

She generally favors her own children—whether from a previous marriage or this one—over her stepchildren. Sometimes her economic motives are made clear: there is only so much to go around, and she wants it for herself or her own children. An equivalent male figure is the Evil Uncle—because inheritance is generally through the male line, the uncle can inherit his brother's children's estate. Envy is another common cause; the Wicked Stepmother either wants to be Fairest of Them All or to have her daughters be so.

On the other hand, the stepsiblings or halfsiblings can but need not be hostile to the hero(ine). If they are hostile, Youngest Child Wins is trumped by the older child's stepchild status.

The father is seldom a factor. If not dead (which is common), he will nevertheless never intervene on his child's behalf.

Her tactics vary widely. She may simply oppress the heroine, keeping her in rags and slaving at household work—sometimes going as far as assigning the Impossible Task. As a Wicked Witch, she may transform the child(ren) into animals. She may drive or send them off. She may act violently toward them and even kill them (and perhaps cap that by cooking them up and serving them to their father.)

The stepchild(ren) may succeed in defeating her through help from their real though dead mother—the Grimms' version of "Cinderella", "Aschenputtel", has Aschenputtel get her gowns from the tree planted on her mother's grave. Talking Animals may also feature, as can a Fairy Godmother. These figures can do everything from performing the Impossible Task on behalf of the child to ensuring that She Cleans Up Nicely despite the dirt and rags she is reduced to.

On the other hand, writers sometimes Bowdlerise fairy tales by transforming a cruel mother into a wicked stepmother. Grimms' original tales of "Snow White" and "Hansel and Gretel" both featured a cruel mother.

Her chances of surviving the ending are not good. The Happily Ever After ending of most fairy tales often dwells with more detail on how the Wicked Stepmother and/or her children were punished than on the hero and happiness. On the other hand, stepmothers who are not disposed of often return; when she is not executed at the wedding, she may, for instance, try to kill the heroine when she gives birth and replace her with her own daughter; so the Fairy Tale doesn't end (happily or not) until she's dead.

Sometimes preceded by a Guess Who I'm Marrying scenario. Can involve a Missing Mom; older stories usually do, often caused by Death by Childbirth.

A common subversion is the jealous Daddy's Girl regarding any stepmother as a Wicked Stepmother.

The Redheaded Stepchild is a particular victim.

Subtrope of Evil Matriarch. Note that the Magical Nanny often becomes a stepmother, but never a wicked one. Department of Child Disservices is a modern organized variation.

Examples of Wicked Stepmother include:

Retrieved from "https://allthetropes.org/w/index.php?title=Wicked_Stepmother&oldid=1902728"
Categories:
Cookies help us deliver our services. By using our services, you agree to our use of cookies.