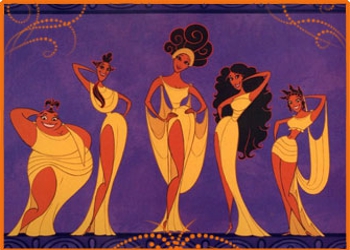 Literally in this case.

A minor character or group of minor characters who offer commentary and/or opinions on the actions of the main characters, usually by Breaking the Fourth Wall and addressing the audience directly. Often, they say what the audience is thinking (or should be thinking). While a lead character can do this himself, it doesn't make him a Greek Chorus; a proper Greek Chorus differs by being removed from the action and thus able to view it with something approaching objectivity. The role is frequently played by Those Two Guys.

Strictly speaking, an omniscient Narrator usually wouldn't qualify as a Greek Chorus. However, the lemony type who repeatedly breaks the Fourth Wall and makes asides to the audience to the point that they're a "character" unto themselves might reach the point where they overlap with it. If the narration is revealed to be by an actual main member, retroactively telling the story to someone else, it may count, but the important qualifier is that their opinions are objective and express what the audience would think (if they are retroactively self-deprecating of even their own actions, etc.).

Named for the choruses of ancient Greek theatre, who did exactly this.

The Snark Knight, if not the main character, often fits this role.

Compare this to Mystery Science Theater 3000, where the comments come from outside the story.

Examples of Greek Chorus include:

And thus ended the trope page.