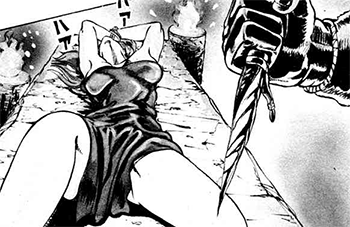 The hallmark of the Religion of Evil (and, to a lesser extent, Cults), with a tendency to leave behind blood-stained altars. Cold-Blooded Torture is common as a technique.

The Super-Trope of Virgin Sacrifice, Appease the Volcano God, Targeted Human Sacrifice, and Chained to a Rock (which often involves the chained getting Fed to the Beast). Does include the sacrifice of other intelligent races. Just about required for A Fete Worse Than Death.

The nastier forms of Marriage to a God overlap with this, as do a number of devices Powered by a Forsaken Child. It's also the only funeral practice that can mark characters as evil even if carried out as part of the respect Due to the Dead. Mayincatec is replete with this.

Note: Be careful when sacrificing someone to summon and make a Deal with the Devil: It's not unheard of for the victim to get to make a deal instead of you...

There is more evidence of this in Real Life than of the subtrope Virgin Sacrifice, though most of it is accusations by the enemies of the people involved.

Examples of Human Sacrifice include:

Retrieved from "https://allthetropes.org/w/index.php?title=Human_Sacrifice&oldid=1952628"
Categories:
Cookies help us deliver our services. By using our services, you agree to our use of cookies.