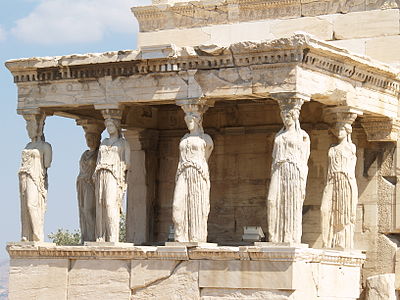 Think of Crystal Spires and Togas, but without the crystal spires or the togas.

Home of columned temples, chiton-wearing gods, slinkily dressed goddesses, amazons, and bearded philosophers. Also home to mythic thong-wearing heroes who ride winged horses and do great deeds (all without getting either chafed or sunburnt). The Spartans live here too, and they're known for their brutal training methods, stylish slow-motion fighting techniques and for being manly enough to charge nearly naked into battle even when outnumbered 70 to 1. And they definitely aren't gay. Frequently confused with Ancient Rome by directors who just don't care.

In fact, this picture is a blend of two distinct periods; mythical Greece, conventionally said to end with the Trojan War around 1000BC, and classical Greece, home to the first philosophers. The "classical Greece" period itself tends to blend cultures that evolved and combined over the course of many centuries. Until Athens pulled the city-states together for defense against Persia, Greece didn't have a monolithic culture; it was the sum of the cultures of many independent city-states, all angling to make their patron gods the most important, and all ultimately blended together in the giant food processor of history. If you were to visit the Balkan Peninsula in, say, Pythagoras' day, you'd find that religious practices and social mores varied heavily depending on what city you were in.