Everything About Fiction You Never Wanted to Know.
(Redirected from Iain M Banks)
Jump to navigation Jump to search
/wiki/Iain Bankscreator 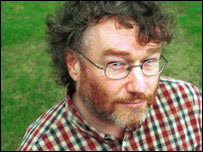 Iain Banks (1954 - 2013) was a Scottish writer who alternated between straight fiction (as Iain Banks) and Science Fiction (as Iain M. Banks). He was listed by the Times as one of the 50 greatest British writers.

Ian Banks had a Quentin-Tarantino-like reputation: he was famous for his first published novel The Wasp Factory which featured murder, animal mutilation and had a darkly comic tone. Explicit depictions of horrible events was a constant. Any article about him was sure to mention exploding grannies or heads on life-support used as punching bags.

However, he was not primarily a writer of horror stories. His novels are densely packed with politics, story and character. He is often pigeonholed as a member of the far-left, but his works don't read as rhetoric.

To scratch the surface of his politics, we have his most famous (Science Fiction) creation: The Culture. On the surface it is a gleeful utopia with no exploitation, rules or money, heavily supported by high technology and benign, highly capable Artificial Intelligences. A place where everyone can get their kicks, even the AIs in the virtual Infinite Fun Space. However, Banks is also a hard-nosed realist: The Culture only exists because of its military and intelligence service, both of which are ruthless and bloody-handed.

In effect: there are no rules in the Culture as long as you don't go breaking the rules.

If his take on utopia was marbled with reservations, his depiction of totalitarian societies was more stark. You would have to work hard to develop a Misaimed Fandom for his fundamentalists, kings and corrupt politicians.

However, Banks was a great appreciator of the theatre of fascism and the romance of warriors and weapons. This was coupled with his willingness to treat people who are doing foolish and/or evil things with seriousness and sympathy. He also liked to confront means and ends rather than glibly state that the end doesn't justify the means. Put it all together and there aren't many easy answers left.

"...a story which both embraces and rejects the romanticism of space adventure; a story which unsettles as often as it thrills." T. M. Wagner, reviewing Consider Phlebas.

Banks loved complexity. In Use of Weapons alternating chapters travel in opposite directions along the timeline, with symbology and causality tying each couplet together. It also has many characters, deceptions, lies, civilisations, technologies and religions. Quoting Banks:

"Science fiction, and especially space operas, are like working with a cathedral-filling organ. You've got lots of stops you can pull out, a second keyboard, a footboard!"

Banks was happy to borrow ideas from all over the Science field. Sometimes this complexity gets out of hand. Feersum Endjinn is perhaps an example when the special effects take over and the story gets lost.

A saving grace is the style: he is generally noted for having had a clear matter-of-fact style. Coupled with an earthy directness, his writing helps ground the flights of fancy.

Banks' straight fiction is often harsher. Lacking the relief of science fiction grandeur or Culture-like optimism, his straight fiction is usually laden with horror and unflinchingly negative takes on humanity. As a result, his non-genre fiction can seem nihilistic. Or to put it his way, "Full of gratuitous nastiness but a cracking good read." A relatively gentle place to start is Espedair Street -- a strange rags-to-riches tale of rock megastardom finally run aground.

Bank is unusual in having been a cross-over author: he was as least as famous and successful as a conventional fiction author as a Science Fiction author.

In his personal life he had a reputation for hard drinking, drug use, powerful cars and an interest in explosives. This rambunctious lifestyle seems to inform his books, which exude an adolescent brio. Confoundingly, in person his appearance had been likened to a university lecturer, and for all the darkness in his novels he came across as quite upbeat and jovial. He was a regular at Science Fiction conventions before his death in 2013 from cancer -- not necessarily to promote himself but because he was "one of us" -- a fan in his own right.

Shortly before his death he gained some media attention for publicly cutting up his passport in response to Tony Blair's decision to take the UK into the Iraq war.

He reported his childhood as being a secure and happy one. A Scottish sense of strong family ties and clannish loyalties perhaps informs his work which can be downright odd in contrast to other elements:

"I'm veering wildly across the road of literature, from the cosy sentimentality of The Crow Road and Whit to the deeply unpleasant, gratuitously nasty stuff like Complicity."

In summary Iain Banks is not for the faint hearted, but a lot of fun and great food for thought.

Iain Banks' works with their own pages:

Tropes in Iain Banks' work
Retrieved from "https://allthetropes.org/w/index.php?title=Iain_Banks&oldid=1142886"
Categories:
Cookies help us deliver our services. By using our services, you agree to our use of cookies.