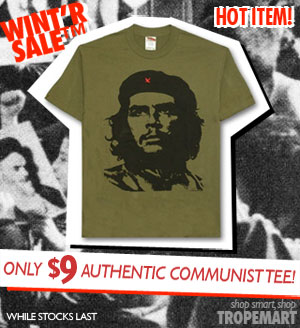 But Wait! There's More! Call now and get YOUR copy of the Communist Manifesto for the low price of only $2.99!

The writer has a vision. They've created a character who represents everything they loathe, and have placed him in a setting that satirizes everything they hate about modern society. Bring on the Moral Guardians and Media Watchdogs; he's prepared for controversy!

Only... it doesn't quite work like that. Instead of seeing a loathsome, hateful figure, the audience sees a Woobie who only is the way he is because of his daddy issues, and feel sorry for him instead of hating him... or even find him cute. They take the author's painstaking satire at face value. The Crapsack World the writer has created is somewhere they think is pretty awesome. They have, in the writer's view, missed the point: ignoring the subtext that the writer had thought was obvious in favor of the text—and they really like the text.

The work and its creator have acquired a Misaimed Fandom. It's around this point that the writer learns exactly how different they are from their fans... and, often, actively begins to hate them.

There are many paths leading to a Misaimed Fandom, but many of them originate from the 'Death of the Author' theory; the idea that the interpretations of the text agreed with and intended by the creator of the text are not the only valid interpretations of that text. No matter how many times Word of God states their case, there's always going to be a large portion of the readers who will have their own very different perspective. And they're always going to be able to find something in the text to help their case, whether the author intended it to be there or not.

Of course, while fans are entitled to their own interpretation, that does not mean they are always right. The writer's original intention should usually be considered first; they're the ones actually putting their thoughts down and getting them published, after all. But this doesn't mean that fans have to worship at the writer's feet. Works have to stand by themselves and there is a limit to what authorial intent can change. Ultimately: when words and images clearly depict A, no Word of God can make it B. On the same note though, and most importantly, if words and images clearly depict A, Word of God confirms A, the fans who swear up and down it was B make up the misaimed Fan Dumb.

Sometimes Misaimed Fandom is a matter of cultural change: where a writer has fallen behind social progress they may perceive Misaimed Fandom about their work as villains and heroes switch places in the popular mind.

In some cases, the reader may genuinely be seeing something that isn't there, or might not be looking hard enough; if the text isn't read correctly then the interpretation that follows is naturally going to be flawed. The reader might miss some of the more subtle meanings or interpretations. Alternatively, they might read the text too closely, and find symbolism and meaning that the author never intended—especially if the symbolism in question is something quite obscure, that the author may not necessarily be aware of. And, of course, they may just be missing the point.

Often, however, the fans know full well that their interpretation of the text isn't that of the author, and may acknowledge what the author was trying to do, but choose their own interpretation anyway. They may be aware that the author is satirizing them and their views, but they're good sports and can appreciate a well-done jab in the ribs, especially if it's not without affection.

And sometimes the Misaimed Fandom simply comes from the fact that the author's not that good a writer. If a message is poorly communicated to begin with, then of course there's going to be problems when interpreting it. Some authors go for subtlety when when they really should have been a bit more obvious, or try to set up a Straw Character only to make the strawman's arguments more logical and valid than their hero's. In these cases, the fandom is misaimed because the author's botched the sights on the rifle.

Other times, the Misaimed Fandom starts out as the target audience, but becomes misaimed when the creators decide to take a series in a different direction. The original fandom often doesn't like this one bit.

And oh yeah, the inverse happens too. Sometimes people dislike something for playing cliches and tropes straight, when it's actually parodying or deconstructing them.

Do not confuse this with an Alternative Character Interpretation. A Misaimed Fandom fails to understand the author's intention for a character, no matter how Anvilicious it may have been; an Alternative Character Interpretation understands the intended or default interpretation, but deliberately subverts it. Another related trope is Rooting for the Empire, when you root for the villain without misinterpreting them as a good guy.

This trope comes in many forms, which are listed below (and it's a looong list), as well as tropes that can be compared, connected and contrasted to:

Examples of Misaimed Fandom are listed on these subpages:

Retrieved from "https://allthetropes.org/w/index.php?title=Misaimed_Fandom&oldid=1789720"
Categories:
Cookies help us deliver our services. By using our services, you agree to our use of cookies.