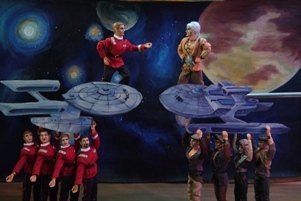 A space Opera is a work set in a far future space faring civilization, where the technology is ubiquitous and entirely secondary to the story. It has an epic character to it: The universe is big, there are lots of sprawling civilizations and empires, there are political conflicts and intrigues galore. Frequently it takes place in the Standard Sci Fi Setting. In perspective, it is a development of the Planetary Romance that looks beyond the exotic locations that were imagined for the local solar system in early science fiction (which the hard light of science revealed to be barren and lifeless) out into an infinite universe of imagined exotic locations.

Expect to see a dashing hero cavorting around in sleek, cigar-shaped Retro Rockets, Green Skinned Space Babes, Crystal Spires and Togas civilizations full of Space Elves, Wave Motion Guns capable of dealing an Earthshattering Kaboom on a daily basis, and an evil Galactic Empire with a Standard Sci-Fi Fleet, including an entire universe full of beat-up mechanical objects capable of being resurrected with Percussive Maintenance.

Note that this is quite different from the original definition of space opera, which was a derogatory term. It was a variant in a long line of terms for substandard genre fiction: 'horse opera' was bad Western fiction, whereas a 'soap opera' (so named because they began as hour-long ads for soap) was a hackneyed drama. The phrase was coined in 1941 by Wilson Tucker to describe what he called "the hacky, grinding, stinking, outworn space-ship yarn". (It's said that before 1975 or so, the only author who ever intentionally set out to write a space opera was Jack Vance, who wrote a novel about an opera company in space.) Weirdly, this means that today many works which were originally touted as examples of 'serious' science fiction, such as the Lensman series, are today held up as prime examples of Space Opera. As more authors and writers came to embrace the space opera style, the term has largely lost its negative connotations. Assisted by writers who regarded all tales of action and adventure in space as bad, and so tried to label it all "space opera" in a pejorative sense; they succeeded with the label, but not with keeping it pejorative.

Planetary Romance is an older variant, which is basically Heroic Fantasy In Space—or on a Dying Earth of some sort. While works such as John Carter of Mars and various fantasy novels set on a planet are Planetary Romance, characters like Buck Rogers and Flash Gordon essentially codified the Space Opera concept in the popular imagination by the late 1930s.

Star Wars is probably the most famous modern example of space opera. (Indeed, The Empire Strikes Back was an important moment in changing "space opera" from an insult to a more neutral genre descriptor, due to the involvement of writer Leigh Brackett.) In Star Wars, technology is either magic (the Force) or slightly faster versions of today's gadgets (blaster rifles, hovercars, space ships) and the characters would be right at home in a fantasy novel (evil emperor, Farm Boy, princess).

The genre is useful for long story- and character-arcs but also expensive to film. Unless you do it in animated form, like dozens of Anime series.

The opposite of Space Opera would probably be Hard Science Fiction. In recent years, however, there has been a trend towards incorporating hard sci-fi elements into space opera, as in Starship Operators, the 2000s Battlestar Galactica, Firefly or especially Revelation Space—in fact, "New Space Opera" has gained some currency as a term referring to works that combine fast-paced adventure plots with some degree of hard SF rigor.

See also Two-Fisted Tales, Pulp Magazine, and Wagon Train to the Stars. In many ways, this is the science fiction equivalent of High Fantasy.

Note that while many more famous space operas go to the "ideal" side of the Sliding Scale of Idealism Versus Cynicism, more recent ones are harder and more cynical: Babylon 5, Battlestar Galactica and Firefly being most prominent in Live Action TV.

Examples of Space Opera include:

Retrieved from "https://allthetropes.org/w/index.php?title=Space_Opera&oldid=1642424"
Categories:
Cookies help us deliver our services. By using our services, you agree to our use of cookies.