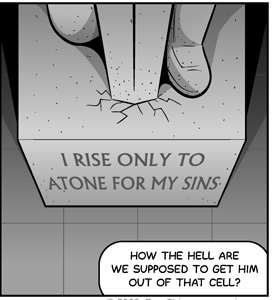 This is why you don't want to take The Atoner for granite.

Once, they were a major Big Bad. They did every crime one could think of, and did it with a song in their heart and a skip in their step.

But now, The Atoner has realized the error of their ways, possibly wants to make amends, and have decided that they will do so via heroic deeds. Simply going to jail won't do, because this isn't always applicable to their "sin." Besides, they have all these amazing skills from being a villain that would be wasted, and they can do more good out there.

The problem is, they often have to wrestle with going back to their old self, along with the massive guilt built up over years of carefree evil. Also, said previous villain skills usually involve killing people in very messy ways, which can result in karmically harmful situations. Other times their evil side won't go down without a fight, and end up manifesting itself as a Super-Powered Evil Side.

Ultimately, it comes down to the fact that no amount of babies saved will make up for killing people in the past. The Atoner usually realizes that "Redemption is the path, not the destination" and continues for the rest of their life.

...which usually isn't very long, because Redemption Equals Death. Generally the only Atoners who avoid this are main characters of a series, who are already in the atoning stage by the series' start. Atoners often end up as Knights in Sour Armor. Those who believe redemption inherently equals death may well become Death Seekers.

A subtrope of this is "Assassin Wants To Quit." Stories involving them allow us to cheer on the assassin as they battle their former employers using the same murderous skills they honed during their previous career. Atoners sometimes go on a Redemption Quest in order to atone.

Would-be Atoners who are not sincere are trying to Buy Them Off. Not to be confused with The Aloner, though they can both coincide if the character is trying to atone for killing off everyone else on the planet. The Atoner must be very careful not to run into the Deadly Change-of-Heart.

Genuine atoners have a high chance of becoming The Woobie, especially if they were an Anti-Villain in the first place. See also, Be All My Sins Remembered, where they continue to suffer a guilt complex over their past misdeeds. Contrast with My Greatest Failure - instead of a formerly evil character turning from their past, a good character feels the need to atone for not preventing a bad outcome (regardless of whether they could have changed anything). The Atoner may have experienced Go and Sin No More.

Examples of The Atoner include:

Retrieved from "https://allthetropes.org/w/index.php?title=The_Atoner&oldid=1858454"
Categories:
Cookies help us deliver our services. By using our services, you agree to our use of cookies.