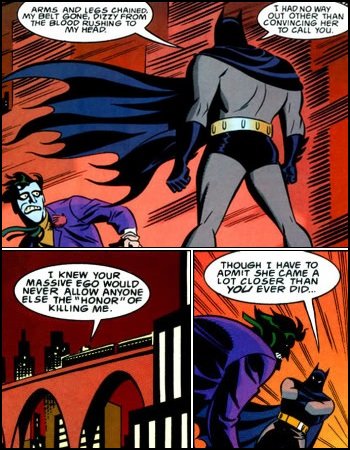 Provided that a character is smart enough and manipulative enough, they can get the people around them to do just about anything. Sometimes this can be accomplished by the power of charisma, but other times it needs to be perpetrated through an elaborate scheme. This scheme takes into account everything that The Chessmaster (as well as the viewer) knows about the characters being manipulated, and uses it against them. The patsies in this scheme only act and respond as their own predictability dictates and all the pieces fall into place.

This is the essence of the Batman Gambit, which is a storytelling device that can be used by any unusually intelligent character, be they good or evil, to achieve what they want by using their own intelligence to make sure that the most probable outcome that is beneficial to them arises.

This trope relies heavily on Flaw Exploitation manipulating, although the term "flaw" is used very loosely here. Sometimes the flaw is that the villains are so predictable that they'll take the first chance they have to do something mean and underhanded. Other times, the flaw is that the heroes are so heroic that they'll act for the greater good without even thinking about it. A particularly Genre Savvy person will recognize the fact that heroes always win—and design a plan based on the assumption that they will succeed.

The key difference between the Xanatos Gambit and the Batman Gambit is that while the former is structured so that any reasonable outcome will work to the advantage of the gambit instigator (and is thus "foolproof") the Batman Gambit does have a failure condition. Indeed, this failure condition will often be quite obvious and foreseeable to the audience, who have the benefit of perspective and objectivity. The victims of the gambit, however, do not enjoy those luxuries.

The key to making a Batman Gambit work is by carefully guiding and manipulating the motivations of those involved, so that the "obvious" course of action to them is to do what will make the gambit work and it never occurs to them to do things that would ruin the gambit. Because of the presence of this obvious failure mode, anyone who tries to pull off a Batman Gambit and fails often just ends up looking like a fool.

In short, if there is any reasonable action the pawns could take that would ruin the entire scheme, then it's a Batman Gambit.

Named after Batman, who typically uses these as a way of showing off his Crazy Prepared superpower.

Contrast with the MacGuffin Delivery Service, and the failed attempt, Springtime for Hitler. Also see Indy Ploy for the exact opposite. A gambit that relies almost entirely on misdirection is a Kansas City Shuffle. If things do go wrong, but the person keeps adjusting things so that Plan A works anyway, he's playing Xanatos Speed Chess. The Tape Knew You Would Say That is a subtrope.

Not an Amalgam Universe character. Also not a Slash Fic.

Examples of Batman Gambit are listed on these subpages:

You came from a failed link? No? Curses.

Retrieved from "https://allthetropes.org/w/index.php?title=Batman_Gambit&oldid=1953275"
Categories:
Cookies help us deliver our services. By using our services, you agree to our use of cookies.