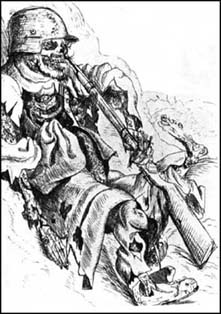 Otto Dix, Suicide in the Trenches -- big toe on the trigger.

When this trope is in play, war is a hellish, traumatizing nightmare, and anyone who comes out of it alive will end up a Shell-Shocked Veteran. Those who take pleasure in it are Ax Crazy Blood Knights or worse. This trope gained its name by the famous quote from General William T. Sherman, "War is all Hell, and I have every intent of making it so." Most people quoting it shorten it to the trope name.

The motives for war are depicted as being irrationally base; survival, dogma, fear, hatred, insanity, personal conquest, or even all of the above prevail. For the average man and woman, the force of wartime authority overrides any thought of their own.

Sometimes, the war is shown to be unwinnable, despite all the sacrifices made. There is a correlation between being on the losing side of a war and making a work following this trope: compare treatments of World War II and Vietnam War.

War Is Hell works often show the cumulative effect of exposure to deprivation, violence, and military culture: the horror goes on and on, brutalising people a little more each night.

Truth in Television, though fiction may exaggerate, and the degree to which this is true will vary from war to war, country to country, and even soldier to soldier. One thing sure, someone is going to cry.

Historically, this trope might be Newer Than They Think. There is a long tradition of glorifying war: bravery, discipline, manliness, martyrdom and the right of the strong to take from the weak. As photographs, film and other forms of mass media from the front became more and more common, this trope became more and more mainstream, eventually replacing that tradition.

The earliest recognized instance of widespread belief in this trope is probably the Thirty Years' War, which dragged on forever, ruined Germany, and involved such frequent changes of alliances that nobody was really sure why anyone was fighting anybody. The mass armies and new military techniques also meant that it directly affected a large segment of the population. As a result, several artists of the period depicted war as a distinctly nasty experience, and popular accounts like sayings seem to confirm a rather gloomy attitude. However, after the Thirty Years' War ended, European militaries grew smaller and wars further from the people (until the Napoleonic Wars, at least), and the trope receded.

The American Civil War prompted another early expression of the trope: Union General William Sherman is commonly credited with saying "War is Hell." It was the first true industrial war and chewed through the American population and countryside. Furthermore, it was the first war that was extensively photographed and one public exhibit during that war, The Dead of Antietam, made for such a powerful impression that one reviewer described it as much like distributing the war dead on the streets of the city.

However, since the reasons for that war were obvious to everyone fighting—making the horrors of war just a bit more bearable—the trope only really caught on with World War I, which was long, bloody, and seemingly pointless. Thanks to near-universal conscription in all the major countries of Europe, a large number of writers and poets of the early 20th century had experience on the front lines, and they did not like what they saw. The identity of one recorded World War I soldier who did enjoy his wartime experience probably entrenched the trope in Western culture furthermore afterward, especially when said soldier started the most devastating war in human history.

There are several reasons for this. One is that we aren't born as sociopathic soldiers and most modern societies frown on killing for any reason. Most military basic training spends quite a bit of effort to instill into recruits that killing is acceptable. For a good look, Full Metal Jacket is a movie to watch. Still, overcoming a lifetime of moral imprinting is very difficult. Many past societies taught their Child Soldiers from birth that killing in war was their noble destiny, so they avoided this problem.

Second, being in constant fear for your life and limb is obviously stressful. Especially in the era of modern combat, which is more dehumanizing than ancient combat. If you were a genuine badass who is strong and skilled with weapons, you felt like you were in control of your destiny. Furthermore, war often took the form of raiding and rustling and might have actually been fun; exceptions include those who were conquered and thus couldn't write poems. Modern combat, with artillery, IEDs, bombers, nukes and other horrors created by technological evolution, means that death can strike from above killing us all without knowledge, warning or defense, instilling a mindset of paranoia, insignificance, helplessness and nihilistic despair similar to that portrayed by Lovecraftian Fiction. WWI machine guns and a slow blinding death (or worse) by chemical weapons meant that you could die without ever seeing the enemy, thus rendering your skill level practically moot.

Third, the societies that promoted war were also Crapsack Worlds; life was already a short and unpleasant hell. Illness such as bubonic plague could kill you slowly and painfully, food and water was rarely enough to feed everyone, and losing a limb meant losing that precious scrap of food on the table, since there was no such thing as veteran support. Karma Houdinis roamed the streets while No Good Deed Goes Unpunished. Again, past warring societies put further that the very least you can do is to fight and quickly die in an adrenaline rush knowing you did something meaningful. In Norse Mythology, those who died in combat went to Valhalla.

And finally, we live in an era where even ordinary people can write poems. Past societies tended to disdain slaves along with "the common folk" and only recorded the way they lived in general terms. War has probably always been nasty for poor people: When armies are small and aristocratic, the noblemen trample all over your fields, ruining your crops; when they're large, you have to leave your farm or shop, potentially leaving your family without support, to pick up a spear and some pathetic armor and join the army, or perhaps get in the galleys and row, or Made a Slave...and still, armies trample all over your crops, except when they steal them. These opinions would not be found very often in pre-modern writings, because the people who held them neither knew how to write nor knew anyone who did and would care to listen; today, these stories get picked up fast.

This doesn't necessarily discredit war or render it obsolete. If anything, this trope has helped promote justifications of conflict along the lines of it being either a "Necessarily Evil" or an undesirable, last-ditch option when more peaceful means fail. In addition, paradoxically and in one of the most confounding ironies known to man, it's been argued that war in some sense has been good for something: namely helping make larger, stable and more peaceful societies possible while reducing the risk of violence over time, and thus less war.

May overlap with, but not to be confused with, Hell Is War. Contrast War Is Glorious, which is not mutually exclusive with War Is Hell, especially when the audience gets a kick out of seeing people kill each other, no matter how ugly or condemning the work is. See also Armies Are Evil (highly negative takes on the military),

No real life examples, please; it's Truth in Television for every war, past, present and future.

Examples of War Is Hell include:

Current themes explored in the series so far include slavery, and later genocide, a Complete Monster of a dictator and how he manipulates the population into not fighting against him (this includes full-out brainwashing), Grey and Grey Morality with the resistance overstepping the mark to achieve their end almost as much as the Dictator does, torture of prisoners, the nature of terrorism, religious fundamentalism, and discrimination resulting in dehumanisation. There is also an Author Tract dropped against the idea that a real man is capable of murder. Yeah, it's a pretty heavy series. And all set within a small human colony in space, too.

And this is before we get to The Tale of Iroh in the "Tales of Ba Singh Se" episode, which shows the quiet but powerful sadness of a father losing his son to the war. It hammers home the message of the inevitable personal consequences of war, and why it should not be entered into lightly. If there's a way to show this trope responsibly in a kid's show, Avatar: The Last Airbender is probably the best example that you could possibly find.

Retrieved from "https://allthetropes.org/w/index.php?title=War_Is_Hell&oldid=1838822"
Categories:
Cookies help us deliver our services. By using our services, you agree to our use of cookies.