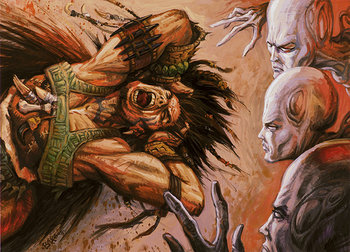 They're really giving him a headache.

A character is attacked by a villain in the most painful non-physical way possible. Their mind and soul are assaulted with painful, horrifying visions and memories, and broken until they're powerless and numb, but not dead, although afterward they may wish they were. No sexual contact occurs, but everything else is there to resemble a rape - violation of private parts, helplessness, and the corruption of what could otherwise be a source of joy.

The physical attacks won't go very far; all (or most) of the agony is inflicted mentally and emotionally, and it's chilling to see a villain be that cruel. The traumatized victim suffers all of the side-effects afterward (such as Rape Leads to Insanity). May include further sexual symbolism for good measure, such as severe and unfunny Clothing Damage and sinister Double Entendres.

Comes in two variations: one is a completely "mundane" but no less horrifying brand of torture that nonetheless breaks a character's mind. The other is the above done via Mind Probe, Psychic Powers, Brown Note, illusions, or seeing something Man Was Not Meant to Know. All too frequently the consequence of encountering an Eldritch Abomination; even so much as looking at one of them might cause permanent damage to sanity. Of course, Mind Rape can also involve forced exposure to Mind Screws.

Just as Rape Is a Special Kind of Evil, a character indulging in the Mind Rape of another character primarily for their own pleasure or enjoyment is a good sign they are almost certainly a Complete Monster or have at least crossed the Moral Event Horizon. Doubly so if the sexual symbolism is present. A Well-Intentioned Extremist, Anti-Villain or even the heroes may resort to Mind Rape if circumstances force them to, but only the lowest of the low will take a sick enjoyment out of it.

The less said of the things that are created when this trope meets Rule 34, the better.

Can be a possible cause of I'm Having Soul Pains, and can function as a Stupidity-Inducing Attack. Any character pulling this has little or no Mind Over Manners. Heroes will try to protect themselves from these by entering Heroic Safe Mode or trying out some Brain Bleach.

Compare Fate Worse Than Death, Subtext, and Villainous BSOD. Logic Bomb is what happens when computers (or really rational people) experience this due to encountering and being confused with mindscrews. Contrast with the Care Bear Stare, which assaults the target with happy thoughts, like rainbows and stuff.

No real life examples, please; this is a rape trope even if the rape is purely in the mind, and All The Tropes does not care to squick its readers.

Examples of Mind Rape are listed on these subpages:
Retrieved from "https://allthetropes.org/w/index.php?title=Mind_Rape&oldid=1934636"
Categories:
Cookies help us deliver our services. By using our services, you agree to our use of cookies.