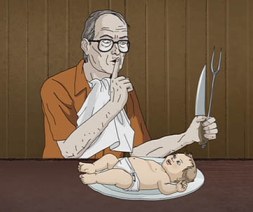 Wait, this trope is not about humanitarianism. Quite the opposite, in fact.

Cannibalism is considered one of the greatest taboos, so naturally, it's become a trope. One idea which stands out is that human flesh is superficially similar to swine flesh, hence the nickname "long pig" and the phrase "eating the long pork". A robot designed to taste wine corroborates this idea. Thus, it should be delicious, which is reflected both in Hannibal Lecter's gourmet taste and in the idea in Sweeney Todd that pies with this ingredient would sell like hotcakes.

You'll often have people eat something and not know what it is, and then discover the ghastly truth, such as in many an Inn of No Return.

A mostly Discredited Trope (see the second Pirates of the Caribbean movie for an exception) is a variation that portrays members of non-Western societies as cannibalistic, often attempting to cook visiting Europeans in a pot.

In Speculative Fiction, cannibalism is generally extended to include all sapient or humanoid creatures, even if they aren't technically human. Any species that includes humans (or other humanoids) in its diet is usually portrayed as villainous. Likewise, humans treating other sapient species as food are rarely treated sympathetically (unless What Measure Is a Non-Human? is in effect).

To various degrees, anthropophagy is usually expected of Zombie Mooks. In comedic versions, jamming an apple in the victim's mouth is almost an Obligatory Joke. Compare No Party Like a Donner Party.

Compare with Alien Invasion, Auto Cannibalism, Brain Food, Cannibal Clan, Cannibal Tribe, Cannibalism Superpower, Carnivore Confusion, Eat the Rich, Eats Babies, Human Resources, I Ate What?, Let's Meet the Meat, No Party Like a Donner Party, To Serve Man, and You Are Who You Eat.

Examples of I'm a Humanitarian include:

Retrieved from "https://allthetropes.org/w/index.php?title=I%27m_a_Humanitarian&oldid=1965945"
Categories:
Cookies help us deliver our services. By using our services, you agree to our use of cookies.