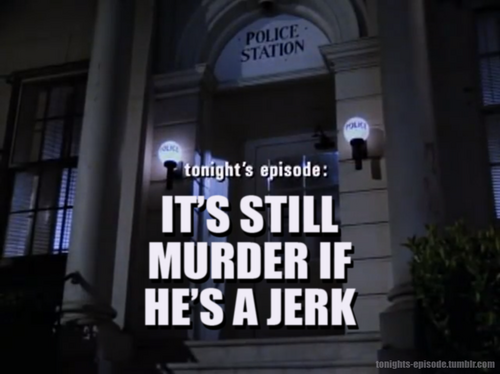 For example, the victim will have been someone who enjoyed crushing people for the fun of it, or who ripped off at least a dozen people, and possibly more, or who was a criminal himself, etc.

The frequent impression left is that "the victim had it coming" - an author has a corpse-shaped hole in the story, and decided to fill it with a character the audience won't mourn.

It should be noted, however, that an Asshole Victim is distinguished from Laser-Guided Karma and Karmic Death by virtue of suffering some form of punishment that has nothing to do with their malicious character, whereas the latter two get comeuppance specifically because of their malice.

There are three possible reasons for having an Asshole Victim:

Also shows up in horror and suspense films for much the same reasons; Everyone Is a Suspect frequently gets replaced by Clear My Name). However, it will generally not apply to victims of The Scourge of God, except sometimes when said scourge is a Poetic Serial Killer. Criminals in a Colliding Criminal Conspiracies generally are this.

At a minimum, they will have kicked the dog and may be well beyond the Moral Event Horizon, especially in less subtle productions. Pay Evil Unto Evil is when the perpetrator gets away with it because the Asshole Victim deserved it.

Sometimes the memorial services for these victims will be... interesting to watch. Occasionally the writers will get some comedy out of Never Speak Ill of the Dead, if everyone knows the victim was a jerk but no one wants to say so.

A similar concept unites this trope to the Final Girl. She survives because she's the only one without sin or character flaws, She doesn't drink, do drugs, have sex outside of wedlock. She's nice and polite. Everyone else in the movie has such a flaw, making it okay for the monster to kill them.

For dog kickers who kick an asshole (not necessarily fatally), it's Kick the Son of a Bitch. Can also be an invoked Take That, Scrappy! moment. See also Disposable Fiance, which is similar in several respects. When the victim was as asshole for things they did in the process of trying to survive, it's Death By Pragmatism.

In accordance with the "Just-world hypothesis," people may perceive any victim as an Asshole Victim just to keep their belief that people get what they deserve intact.

Not to be confused with people whose posteriors get violated.

No real life examples, please; among other reasons, this trope naturally leads to the Unfortunate Implication that it's okay to kill someone just because that someone is a Jerkass.

Examples of Asshole Victims include:

Retrieved from "https://allthetropes.org/w/index.php?title=Asshole_Victim&oldid=1893780"
Categories:
Cookies help us deliver our services. By using our services, you agree to our use of cookies.