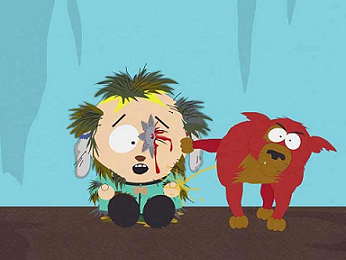 Butters is having a bad day.

It's the end of the episode/Story Arc/series, and the villain's plans have fallen through. Now it's just a matter of dealing with the villain.

Sometimes you want the villain to escape or have the villain realize that his evil ways are wrong and become a good guy, but not this time, usually because it would make for an unsatisfying ending or would just take up too much time. But there's a problem... you can't kill him off. Maybe the censors won't allow it. Maybe he's just not evil enough or what he did isn't deserving of death. Or maybe you just aren't feeling up to bloodshed. Or, of course, he needs to survive for his next Evil Plan.

The answer? The Humiliation Conga!

Everything the villain has built up, piece by piece, comes crashing down in front of him. The lovebirds he kept apart pass by him arm-in-arm, the hotel he spent millions building catches fire and burns down, his former Yes-Man steps on his foot, the bum he spat on now has a Rolex and asks him to light his cigar, and the dog he kicked is now laughing at him (or worse). People Come to Gawk at How the Mighty Have Fallen. And here come the cops; turns out the mic was on when he declared his foul intentions.

In the end, the villain realizes he's in very, very dire straits. He's still alive, natch, but that's not all for the good.

The Humiliation Conga is very popular on kid's shows, as it's a way to ensure the villain is good and defeated without getting unduly violent. Compare with Cherry Tapping in Video Games. Heroes may knowingly tailor one as part of a Cruel Mercy punishment for the villain.

Worth note is this isn't always that the villain can't die or doesn't deserve to, often times they could be killed but it just wouldn't be a fitting end for them. As some proponents of Cruel Mercy would say, sometimes death would just be the easy way out and is too good for the villain in question. The audience may be left feeling such a villain didn't get nearly what they deserved. Thus a well crafted Humiliation Conga offers a satifying alternative. The villain is defeated, but they didn't get the quick and easy death. And naturally this makes sense, the more we hate the bad guy, the more we want to see him suffer. (Then again, sometimes the villain is killed at the tail end of his Humiliation Conga, apparently on the reasoning that his degradation won't be complete until he's a rotting corpse.)

Occasionally, a Humiliation Conga may be quite literal, as the protagonists may find it hard to prevent themselves literally dancing with glee at the villain's downfall. If sex or overly affectionate people are involved, it becomes Sexual Karma.

Because of the nature of this trope, a full Spoiler Warning is probably called for.

May also result in a Villainous Breakdown from the villain. Often the main component of a Break the Haughty subplot. But beware - done too gratuitously or drawn out too long, it might actually make people feel sorry for the trounced villain, or worse, effectively make the protagonists of the story the new bad guys.

Examples of Humiliation Conga include:

Retrieved from "https://allthetropes.org/w/index.php?title=Humiliation_Conga&oldid=1854578"
Categories:
Cookies help us deliver our services. By using our services, you agree to our use of cookies.