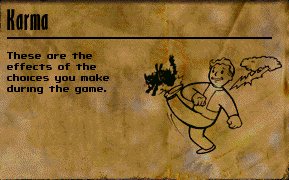 The relationship of cause and effect in Fallout stops just short of Bolt of Divine Retribution. But the cat's relatives will send mercenaries after your blood.

While in Real Life there is rarely a direct and easily traced relation between actions and their subsequent reward or punishment, in fiction the connection is usually a lot more... direct. Help an old lady across the street? Several chapters later, she'll turn out to be an elite ex-commando who will gladly help you storm the Big Bad's castle. Kick the little dog that's barking at you? The dog will sniff you out and lead the heroes right to your Supervillain Lair.

The vacuum by this non-direct causality in real life can be daunting to fill (whole religions and philosophies have and are trying to, describing them is more of Wikipedia's bag) but in stories, it doesn't matter how tiny a helpful or harmful act is for it to have a meaningful and unpredictable effect by story's end. The Aesop here is that every little action, good or bad, will be paid back in kind with the accuracy and timeliness of a laser guided missile. Whether its payload is sunshine and puppies or irony depends on the karma.

If taken too far, stories with this aesop can turn Anvilicious or into a Space Whale Aesop about always being kind to strangers, never kicking puppies et cetera, or the universe itself will make it its personal mission to make your life a living comedy of errors. It also sort of makes "do good for goodnesses sake" a Broken Aesop since the hero can always be sure that smug virtue will get its reward. It's worth noting that in many stories Laser-Guided Karma is what really topples the villain with unforeseen consequences, while the heroes' good deeds give their efforts that final push to succeed via help from the bleachers. It seems along with Pride and the Villain Ball, random dickery and cruelty are the top causes of villain self-foilage.

On the good side of the karma coin:

On the negative side of the karma coin:

See also Pay Evil Unto Evil and Sexual Karma. Contrast Karma Houdini and Karma Houdini Warranty. For karma punishing a hero for their mistakes, see Tragic Mistake. Also contrast with "No Good Deed Goes Unpunished", which is a corrupt form of this trope; as well as Can't Get Away with Nuthin', where the slightest misdeed committed by the hero results in Disproportionate Retribution.

When you help someone, but Laser-Guided Karma is cruelly inverted, you might be looking at The Farmer and the Viper.

See also: Hoist by His Own Petard, when a villain gets killed by their own weapon.

For sake of trope differentiation, examples should be limited to bad karma, heroic or villainous, and when an opponent's "good karma" combines to double wham the antagonist.

Examples of Laser-Guided Karma include:

Then the Joker calls.

And then you see crowds of people in the streets, trying to kill him. Before he could even resort to appeasement, he ends up being the victim of others' appeasement. It would be too cruel an irony if not for the fact that Reese was, conveniently, an extortionist.

Retrieved from "https://allthetropes.org/w/index.php?title=Laser-Guided_Karma&oldid=1948568"
Categories:
Cookies help us deliver our services. By using our services, you agree to our use of cookies.