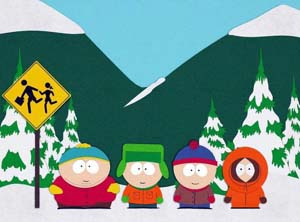 South Park is an (in)famous Animated Series by Trey Parker and Matt Stone, entering its twenty-fourth season[when?] on Comedy Central, and covering the misadventures of fourth grade school kids in the titular mountain town of South Park, Colorado: Stan Marsh, the Straight Man of the group; Kyle Broflovski, a morally fixated Jew; Eric Cartman, a fat, sarcastic sociopath; Kenny McCormick, a young pervert who is usually rendered unintelligible by his tightly drawn orange hoodie and has a tendency to die horribly; 'Butters' Stotch, a nervous, gentle boy with extreme naivite and a tendency to grow a spine at the most unexpected of moments. These five main boys and their friends, family and neighbors find themselves embroiled in all sorts of weirdness, ranging from cults, aliens, and monsters to exaggerated-for-comic-effect versions of Ripped from the Headlines problems, to obvious parodies of action and family movies.

South Park became highly controversial by being offensive in about as many ways possible - bad language, violence, nudity and perverse sexual references, and witheringly sarcastic, highly irreverent, and downright obscene approaches to race, religion, celebrities, politics, homosexuality, obesity, the mentally challenged and just about everything that's possible for people to get riled up over. To add fuel to the fire, all the main characters were children, and the animation was done in a deliberately crude, brightly colored style that made it look like it was made for or by pre-schoolers.

It initially relied on Toilet Humour (especially in the first season) but became more intelligent and satirical as time wore on, and even won a Peabody Award in 2006. Some of the show's early fanbase have long abandoned the show, shown by the fact that after its second season the show dropped from 9.1 million viewers to about 3 million viewers, a number which the show has hovered around ever since. Still, it remains one of Comedy Central's highest-rated shows.

An astonishingly short turn-around time helps keep the show topical with current events. The show is produced using the same graphics engine that helped create the dinosaurs in Jurassic Park. It has been compared to building a sandcastle with a bulldozer. In some cases an episode can be produced a matter of days before it airs, allowing for current events to be parodied almost as soon as they happen. One example includes an episode about the capture of Saddam Hussein airing on December 17, 2003, a few days after his capture took place on December 14.

The movie based on the series had a short (for Hollywood) turn-around time as well. Just two years after the show premiered on TV, the world beheld the theatrical release of South Park: Bigger, Longer & Uncut.

Be sure to check out the characters page.

Most episodes of the show are available for free viewing at the official website.

South Park is the Trope Namer for:
Tropes used in South Park include:
Retrieved from "https://allthetropes.org/w/index.php?title=South_Park&oldid=1948454"
Categories:
Cookies help us deliver our services. By using our services, you agree to our use of cookies.