King Arthur and the Knights of Justice 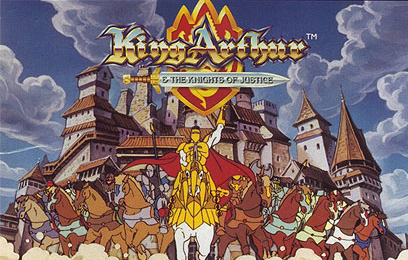 King Arthur and the Knights of Justice is a syndicated 26-episode cartoon show that debuted in 1992. The premise involved the evil Queen Morgana and her cruel Warlord army, commanded by Lord Viper, trapping the legendary king and the knights of the round table in the Cave of Glass. When Guinevere, queen of Camelot is also captured by the Warlords, Merlin searches through time to find suitable replacements for the knights to rescue the queen. Does he find a hardcore team of military commandos? Nope. Instead he finds an Identical Stranger to King Arthur named Arthur King who is a quarterback for the New York Knights, a college football team along with 10 of his teammates and their equipment manager.

The replacement knights are partially successful as they rescue Guinevere and hold back Morgana and the Warlords. Keeping their true identities a secret to all the citizens of Camelot (sans Merlin), the Knights must keep up the facade until they recover the 12 Keys of Truth, one for each knight that only they can initially touch. Once all of the keys were collected, the real knights would be freed and the team would be able to go back home. Too bad the show had No Ending (unless you count the one supplied by the Super Nintendo game).

Tropes used in King Arthur and the Knights of Justice include:
Retrieved from "https://allthetropes.org/w/index.php?title=King_Arthur_and_the_Knights_of_Justice&oldid=1751809"
Categories:
Cookies help us deliver our services. By using our services, you agree to our use of cookies.