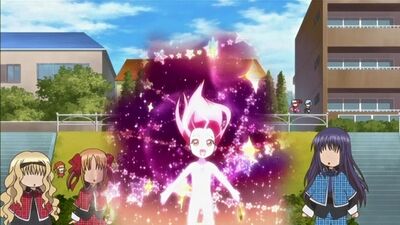 Before the Ordinary High School Student (or a hidden Bad Guy) can access her (or his) secret powers, there must be a power-up. This usually involves a change of form or at least costume, although the precise mechanisms usually vary by type. In Japanese television, this is called (a) henshin. By genre, this usually goes as follows:

Transformation Sequences are good for a show's budget because they provide a large amount of Stock Footage that can be (and often must be) reused each episode. They also provide nice filler for the writers. If a particular transformation sequence occurs multiple times in one episode, a shortened version will often be used after the first time (hopefully).

Rarely is there a special-effects sequence for changing back.

It seems to be an unwritten rule that evil characters almost never get a Stock Footage transformation sequence, instead opting for a special-effects-assisted "insta-transformation", a single sequence in the case of one-shot villains, or just transforming offscreen. This is a good way to spot the Sixth Ranger Traitor or a Noble Demon looking to make a Heel Face Turn somewhere down the line.

Note that many transformation sequences are actually just for the viewer's benefit (and to eat up air time), and the actual change as experienced by the character is instantaneous—or at least very brief. This might explain why bad guys (almost) never attack a hero during his transformation sequence, although the Dangerously Genre Savvy usually will not let the opportunity slip by. This may result in an unstable Partial Transformation.

Examples of Transformation Sequence include:

Retrieved from "https://allthetropes.org/w/index.php?title=Transformation_Sequence&oldid=1895994"
Categories:
Cookies help us deliver our services. By using our services, you agree to our use of cookies.