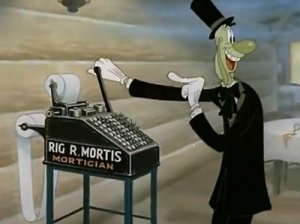 Sometimes, a name isn't exactly meaningful or hiding something, but there's still something about it that is weird. And then you read it really fast, and go, "Oh!" and have your chuckle over the pun.

Pun names are just that: Names that make puns. Some are semi-Meaningful Name in that they sometimes describe an activity germane to the character's profession, such as a baseball player named Homer (of which there have been several actual Major League Baseball players with that moniker, although a few were pitchers).

The pun name is a staple of the prank caller, who will disguise it just right so the other guy doesn't get the pun until he blurts it out.

A Subtrope is the humourous book-and-author gag sometimes referred to as Batty Books. If a lot of characters in a given work have a Punny Name, it could be an example of Punny Theme Naming.

See also Who's on First?, Who Names Their Kid "Dude"?.

Examples of Punny Name include:

Retrieved from "https://allthetropes.org/w/index.php?title=Punny_Name&oldid=1929263"
Categories:
Cookies help us deliver our services. By using our services, you agree to our use of cookies.