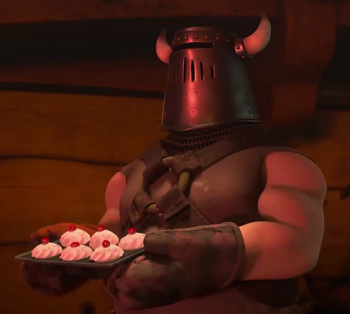 The cherries represent the blood of our enemies! Careful, they're still hot.

For some reason, gritty loners, hulking brutes, and all around uber-manly characters tend to gravitate towards at least one decidedly un-manly interest or hobby. Usually, it involves baking, sewing, or the color pink. While oftentimes this hobby is kept under wraps alongside the Embarrassing Middle Name, Mr. Badass quite often shamelessly enjoys it. Even more often, it's just one of those things you just never bothered to ask about. Plus, apparently he was never instilled with the Pink Girl, Blue Boy archetype when he was growing up. Or maybe he was, and couldn't be bothered with it anyway. It's a safe assumption that he cares very deeply for his mother.

Arguably the basis is that someone who's self-evidently "masculine" doesn't need to demonstrate his masculinity in the stereotypical ways. (Even if by wall-punching steel and Death Glaring, he kinda is demonstrating it in the stereotypical ways. Try not to think too hard about that.) An alternative explanation for this behavior is if the Manly Man sees something as manly then it will become manly as he himself is the definition of manly, kind of like how celebrities tend to change fashion in Real Life. Sometimes there is a Double Standard at work: while cooking in the home may be seen as traditionally women's work, only MEN are great chefs (seriously, look it up - compare Chef of Iron while you're at it). And then some men just like to use this as a practical reason to start fights. Or enjoy the fact that no one will dare to mock him. (Would you?)

On the color pink, it should be noted that as late as 1950's, it was still considered a "boy" colour. Pink was seen as a shade of red, which relates to manly concepts like blood and war. Blue was associated with the Virgin Mary and was seen as a more serene colour reserved for girls (in fact, the traditional colour for wedding dresses used to be blue before Queen Victoria popularized the white dress; all that remained of that is the line calling for "something blue" in the rhyme).

Early in WWI, the French Army uniform included bright pink trousers. This was changed when the leaders realized it made them easy targets. (Actually, French soldiers of early WWI used to wear a special kind of pink [dead link] they called rouge, which was a natural dye from a plant called "garence".)

This trope doesn't work on extremely feminine looking Bishonen or Gender Benders, as it's about MANLY MEN. If a character has enough girlish traits or hobbies that it starts to compromise his manliness, especially if they have an effeminate appearance, then the character may be In Touch with His Feminine Side. If he looks manly but never acts it he's just a Gentle Giant.

A primary character trait of the Cultured Badass and the House Husband.

Retrieved from "https://allthetropes.org/w/index.php?title=Real_Men_Wear_Pink&oldid=1955096"
Categories:
Cookies help us deliver our services. By using our services, you agree to our use of cookies.