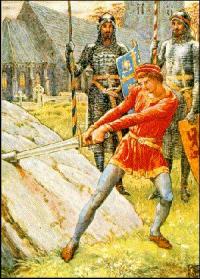 Now me, I'm more impressed by whoever put the sword there to begin with.

The perfect king, who ruled Britain during a Golden Age with Merlin at his side, but fell to treachery, and now sleeps, waiting for Britain's hour of greatest need. Subject of many a Chivalric Romance, long known as the "Matter of Britain," alongside the Matter of France (stories of Charlemagne's court and wars with the Saracens) and the Matter of Rome (The Trojan War, the Aeneid, Alexander the Great).[1]

There may be a kernel of historical truth to the myth, but it has been obscured by centuries of elaborations. If he existed, the historical Arthur may have been a Romano-British leader (a native Briton, ancestors of the Celtic-speaking Scots, Cornish and Welsh) who fought the invading Saxons after the Roman provincial government collapsed. Documents show that after the Battle of Badon Hill, the Saxon tide was turned back for almost a century, but the records are confused as to of who was in charge of the Britons at the time, if anyone; if he existed, Arthur's realm may have been an outpost of people not-getting-killed. The first surviving reference is from circa 600 A.D., and implies that either the legend or at least the man's reputation was well known even then.

It became very popular during the Middle Ages, during which times it was thoroughly reworked into Chivalric Romance and the Knights of the Round Table became heroic Knights Errant. Even French writers, despite patriotic liking for the Matter of France, agreed that the King Arthur tales were the best ones of Courtly Love. (Also, since nobles and kings claimed to be related to Charlemagne, tales about King Arthur could be used by the French king's competitors, such as the Plantagenets, to whom many of the early epic works were dedicated.)

The themes of Courtly Love and later, the Holy Grail, caused writers to invent entirely new characters to introduce them. The version best known today is Le Morte d'Arthur, the work of Sir Thomas Malory, based on earlier material by Geoffrey of Monmouth and other literary predecessors, including multiple layers of retcons and crossovers.

This version incorporates many originally separate stories about the Knights of the Round Table, and other legends such as Gawaine and the Green Knight, Courtly Love, and the myth of the Holy Grail.

This holds true for the English-speaking world. As far as the French are concerned, Chrétien de Troyes' romances are the most important version of the Arthurian myth and for German-speakers it is the verse epics of the trio of Hartmann von Aue, Wolfram von Eschenbach, and Gottfried von Straßburg, especially Wolfram's Parzival. This is not founded on priority, but also on the superior literary quality of these four authors in comparison with their successors. In general, the way the Arthurian myth is viewed can depend very much on the nationality of the viewer; for people from the British Isles (and by extension, from the rest of the Anglosphere), it usually goes without saying that the Welsh (and English) medieval texts reflect an older and more "genuine" version of the myth than the French ones, even though they were in fact written down later. Here a lot is speculation and inference, as the (presumably mostly oral) traditions on which Geoffrey of Monmouth, Maistre Wace, Chrétien de Troyes and others based their works are lost to history.

Any modern Arthurian story that is not about either a) Lancelot/Guinevere/Arthur/Mordred/Morgan and the subsequent collapse of the court or b) specifically about Merlin, is generally going to be about the Grail Quest, despite dozens of other possible plots. However, Tristram and Iseult (usually under the German forms of their names, Tristan and Isolde) by themselves are also becoming more popular, mainly due to the popularity of romance stories.

The genres used may vary from Historical Fiction (no magic and Saxon hordes as Mooks), to Heroic Fantasy, and the story can be set either in the Dark ages after the fall of Rome or in the present day, when King Arthur has returned.

The main characters of stories are:

There are many other knights of the round table, each with their own complex storyline, and, just in case you thought that wasn't enough, most of the names also have other, wildly different spellings. The worst offenders are probably 'Guinevere', 'Mordred', and 'Iseult', with special mention going to 'Nyneve', who sometimes gets entirely new names such as 'Nimue' and 'Vivien.' (Then again, try telling those names apart in cramped Gothic handwriting.) It's pretty much up to the individual what you chose to call them.

The primary Public Domain Artifacts associated with the myths are:

There are also a metric ton of other lesser-commonly-known artifacts from the myths. Just a few are:

]
Retrieved from "https://allthetropes.org/w/index.php?title=King_Arthur&oldid=1846450"
Categories:
Cookies help us deliver our services. By using our services, you agree to our use of cookies.