Everything About Fiction You Never Wanted to Know.
Jump to navigation Jump to search
/wiki/Mark Millarcreator 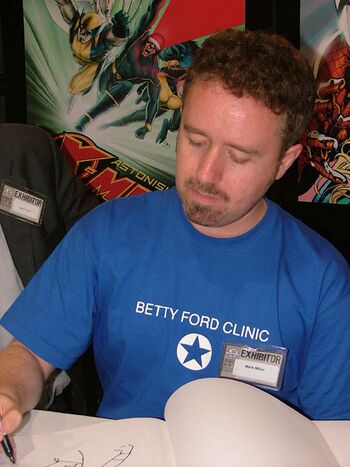 The t-shirt should have tipped you right off. Although it may have been when he was described as Scottish.

Mark Millar is a prominent Scottish writer of comic books. Millar has written for many a character, particularly those within the Marvel Universe, as well his own creations in the form of Wanted, Kick-Ass and so forth.

Millar's writing style is known for pretty much taking the concept of Darker and Edgier and letting it off the leash. His stories involving popular superheroes are sometimes cynical, forcing heroes to deal with a darker world than the one their stories are normally set in. On the other hand, some Millar's earlier super-hero work (on Superman Adventures) and even some of his more recent projects like 1985 are more optimistic in tone. He also runs his own little slice of the internet known as MillarWorld, a comic news/forum where he's more than happy to dole out his opinion on whatever.

Not to be confused with Frank Miller or Mark Miller

Selected bibliography:
Retrieved from "https://allthetropes.org/w/index.php?title=Mark_Millar&oldid=1657344"
Categories:
Cookies help us deliver our services. By using our services, you agree to our use of cookies.