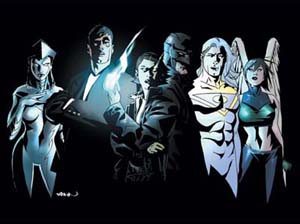 Created by writer Warren Ellis and artist Bryan Hitch, The Authority took the standard superhero tropes and shook them up with a Manga-influenced "widescreen" style that used splash pages and large panels to make the business of saving the world actually look impressive for once.

The original series appeared in May, 1999. The story continued on from the recently cancelled Stormwatch, where most of the team members first appeared during Ellis's run. Ellis started The Authority by blowing up Moscow and continued in suitably bombastic fashion, threatening the Earth with an imperialistic army from an alternate universe and a battle with God itself. Hitch's detailed but kinetic panels conveyed the action with aplomb and the series's style essentially spawned the trend for Decompressed Comics.

Later writers took the team in a slightly different direction. Picking up on the idea that the team originally formed to improve the world, not just save it, they had them executing dictators, defusing international crises and even pulling a coup d'etat on the US Government itself. However, as Status Quo Is God, they have only rarely been able to effect any kind of serious change.

The team's original members were:

Both Jenny Sparks and The Doctor eventually died and were replaced by Legacy Characters, Jenny's next incarnation (Jenny Quantum) and another Doctor, respectively. As of 2007, the other members remain in the team, and other characters, such as Rose Tattoo (Another ex-Stormwatch member and the Spirit of Murder, transformed by the current doctor into the Spirit of Life), have joined the team.

As the series went on, the stories tended to get more and more outrageous, not to mention Anvilicious.

Rather aggressively satirized in the Superman comic book What's So Funny About Truth, Justice and the American Way?, where their equivalents beat up Superman, who was concerned about what he considered to be their violent methods and the pointlessness of killing them. He worked it out without killing them although it didn't look that way, making it a very frightening moment.

Tropes used in The Authority include:
Retrieved from "https://allthetropes.org/w/index.php?title=The_Authority&oldid=1912180"
Categories:
Cookies help us deliver our services. By using our services, you agree to our use of cookies.