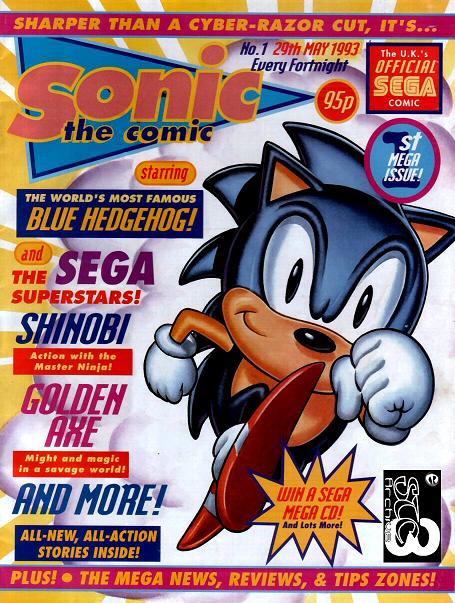 A British comic that ran in the 1990s (but has recently seen an internet revival). Although Sonic the Hedgehog is in the title, originally it was sort of a British, Sega equivalent of Nintendo Power, (although not to be confused with the more straight-laced Official Sega Magazine which ran at the same time, more or less until the launch of the Saturn) showcasing strips about other Sega games and sections including game reviews, cheat codes and walkthroughs, and so forth. As time went on, various factors (including a Sonic version of Wolverine Publicity) meant that most of this gradually disappeared in favour of more Sonic stories.

Along with Sonic, other games to spawn their own strips included:

The Sonic continuity was distinct from all others, chiefly by being the one piece of Sonic media, above any and all of the other comics and cartoons released at the time, which actually strove to accurately translate the world of the games into serial story form. It included the Zones, the rings, the PCs, Star Posts, Badniks, the animal friends and more, and used them as they appeared in the games. At the same time, it acknowledged Sat AM Sonic the Hedgehog and its American comics spinoff with occasional magazine features but did not take any of it into account (though StC may have influenced the American comic back - both series have an Enemy Without plot featuring Super Sonic going on a rampage). It grew its beard after a storyline where Sonic ended up accidentally time-traveling half a year into the future, in which time in his absence Robotnik has conquered the planet: the next ninety-odd issues consisted of stories based around Sonic leading Freedom Fighters against the occupation, until Robotnik was finally toppled in the 100th issue. At this point many fans believe it Jumped the Shark due to the loss of this story-generating setting.

Some changes from other continuities include the fact that Sonic's friends mostly live in the Emerald Hill Zone (not the Green Hill Zone), Knuckles' home is called the Floating Island (not Angel Island) and Nack the Weasel (Fang the Sniper) was introduced as a member of Chaotix - some of these are attributable to poor communication between Sega and their media outlets in the UK. The comic created many Canon Foreigner characters, such as Captain Plunder the Sky Pirate, Robotnik's assistant (and The Igor) Grimer, Shortfuse the Cybernik and Tekno the Canary. The comic redubbed the "Metal Sonic" character/concept as the more distinctive "Metallix" and created a storyline where multiple Metallixes are built, eventually breaking free of Robotnik and turning on their creator. This rapidly led to a Does This Remind You of Anything? (or possible deliberate Shout-Out) when these metal robots with the chest blaster built a larger version on a floating hoverchair as their "Emperor" and went around shouting "Exterminate!"

The comic continuity was not linked to the earlier British novel continuity (which, for example, had Sally Acorn as a character, while the comic did not except in some of the earliest issues), but the novels did appear to influence the comic - for example, both had a time-travel storyline which involves Sonic being forced to instigate the accident which created Robotnik, as the alternative is even worse: Mobius being conquered by the Metallixes in the comics, and the whole universe being infected by Chaos in the novels.

After the printed title's demise, the comic (as well as some of the articles) were continued on by fans of the original mag as Sonic The Comic Online.

Not to be mistaken for The Archie Comic.

Now the original comic has its own site and the issues are being uploaded weekly!

There is also a series of retrospectives covering classic STC, which are posted on youtube, as well as short reviews of new STCO issues as they are released. The first of the retrospectives can be found here!

The article for the online continuation of Sonic the Comic can be found here.

Tropes used in Sonic the Comic include:
Retrieved from "https://allthetropes.org/w/index.php?title=Sonic_the_Comic&oldid=1774123"
Categories: