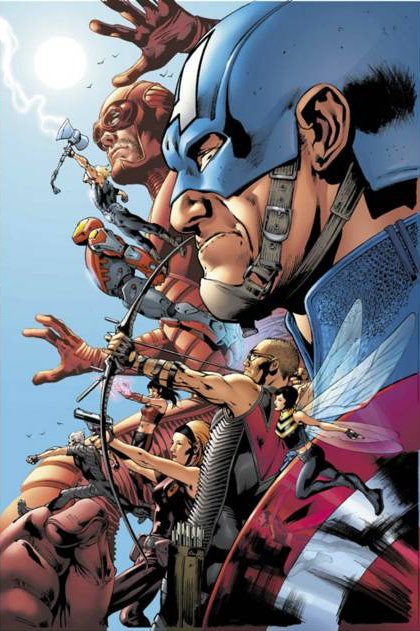 All your favorite Marvel superheroes....only jerkier.

Marvel Comics reimagining of The Avengers as part of their new Ultimate Marvel continuity, courtesy of Mark Millar and Bryan Hitch. The series focuses on the government and SHIELD developing a superhuman army in order to effectively combat the rise of super terrorism and other Persons of Mass Destruction. The Ultimates 3 was penned by Jeph Loeb and Joe Madureira.

The original run was made up of three miniseries

After Ultimatum, the concept was rebooted into two series: Ultimate Avengers and New Ultimates. Ultimate Avengers, by Millar and various artists was told over the course of 3 six issue arcs, centering on the returned Ultimate Nick Fury, Hawkeye along with featuring new Ultimate versions of Marvel characters and original creations for the team of Black Ops super heroes. New Ultimates by Loeb and Frank Cho told the story of most of the remaining original Ultimate team, including Captain America as they faced off against another threat.

The two teams would ultimate clash later on in the Ultimate Avengers vs New Ultimates crossover,which tied into the Ultimate line event "The Death of Spider-Man" leading to a line reboot that had The Ultimates get another series titled Ultimate Comics: The Ultimates, as well as giving Ultimate Hawkeye his own mini-series.

Tropes used in The Ultimates include:
Retrieved from "https://allthetropes.org/w/index.php?title=The_Ultimates&oldid=1860830"
Categories:
Cookies help us deliver our services. By using our services, you agree to our use of cookies.