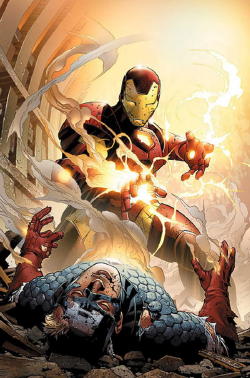 Iron Man's pretty sure this is the right way to handle things. Although, so is Cap.

The New Warriors, during the filming of a Reality TV program, unthinkingly start a fight with several fugitive supervillains (including Nitro) in the middle of a suburban housing development in Stamford, Connecticut. Demonstrating power well in excess of any he's ever shown before (due to secret drug treatments provided by a Corrupt Corporate Executive), Nitro quite literally explodes - killing all of the New Warriors (except Speedball) and 612 civilians, including the entire population of an elementary school.

This sparks a flurry of anti-super feelings in civilians. In the wake of House of M (the previous Crisis Crossover) and Secret War, Congress decides they have to act to control all metahumans, and the Superhuman Registration Act (SHRA) is passed. Although different individual comics in the crossover treated the act in slightly different (and occasionally inconsistent) fashions, the most commonly used presentation of the SHRA included these features:

Captain America refuses to register and hunt renegade heroes, then forms the Secret Avengers, an underground organization that resists the Act. The X-Men declare the whole mess Somebody Else's Problem, and Tony "Iron Man" Stark leads a SHIELD force to help capture all renegade metahumans, hero or villain. The US government, with Stark's concurrence, also puts together a task force of supervillains - the New Thunderbolts - for the purpose of hunting down unregistered metahumans. Some of the most psychopathic and violent villains imaginable (including notables like Bullseye and Venom) are, against all sense, released back onto the streets for the government-sanctioned hunting down of and crippling of unregistered heroes. (Also against all sense, the government hires Deadpool for similar duties.)

The crossover was similar to, but far more extreme than, previous Super Registration Act plots in comics. It is also notable for big changes in the status quo, including the death of Captain America and the unmasking of Spider-Man (among several other heroes). Despite Joe Quesada (then-editor-in-chief of Marvel) promising that Spidey's unmasking would not be undone via a "magic retcon" (those being his exact words), Spidey's unmasking was retconned as a part of Quesada's wildly unpopular pet storyline One More Day - by literal magic.

Most of the Marvel Universe was involved in this, including The Avengers, the Fantastic Four, the Runaways, and many other heroes. The X-Men comics were, by and large, uninvolved in the crossover; this is because of the decimation of the mutant population that happened at the end of House of M. However, two of them did join, both of them time travelers - Cable sided with Captain America, and Bishop joined forces with Iron Man.

In the summer of 2007, Dan Slott teased readers with retconning the whole thing away in the Great Lakes Initiative/Deadpool crossover when Squirrel Girl tried to go back and prevent the Stamford explosion, which had the side effect of turning her longtime crush Robbie "Speedball" Baldwin into the brooding Penance. (She ended up in the future instead.)

In December 2007, a "What If" special was released; a stranger reveals two alternate versions of Civil War to Iron Man, who is visiting Captain America's symbolic grave at Arlington. The first is "What If Captain America led all the heroes against the Registration Act?" and the second is "What if Iron Man lost the Civil War?". Additionally, because of the times the stories take place What If: Annihilation can be considered a third alternate version of the Civil War, with the Annihilation Wave reaching Earth during the climactic battle of the war.

The event's plot is used as the story in the video game Marvel Ultimate Alliance 2, as well the is the basis for the Marvel Studios film Captain America: Civil War, which likewise features Captain America and Iron Man in opposition to each other. Initially.

Tropes used in Civil War (Comic Book) include:
Retrieved from "https://allthetropes.org/w/index.php?title=Civil_War_(Comic_Book)&oldid=1782917"
Categories:
Cookies help us deliver our services. By using our services, you agree to our use of cookies.