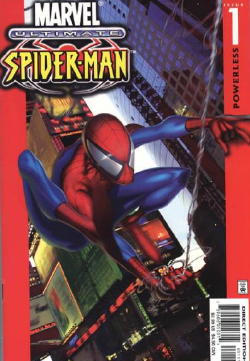 Ultimate Spider-Man, part of the Ultimate Marvel line, is a retelling of the original Spider-Man comic written by Brian Bendis and drawn, originally, by Mark Bagley and later by Stuart Immonen. The Bendis and Bagley collaboration, which lasted for 111 issues, holds the record for longest continual run on a Marvel Comics series by two people.

Was known as Ultimate Comics: Spider-Man after a six-month timeskip following Ultimatum until the comic reached its 150th issue (counting both pre- and post-Ultimatum issues), and is now back to its original numbering and naming format. For 10 issues, as the series is ending with issue 160 & Peter's death, only to return a few months later with a new character in a new Spider-Man costume. The original series, under either name, lasted for 160 issues, from November 2000 to August 2011.

There's also the 2005 tie-in game, which introduced Ultimate Beetle & was marketed as being in continuity with the series; this has since been the subject of Canon Discontinuity, with several events in the game later being adapted to the comics, and others officially never taking place. And on the subject of video games, Ultimate Spidey also made an appearance in 2010's Spider-Man: Shattered Dimensions as one of the four playable characters (On home consoles).

Not to be confused with the Ultimate Spider-Man animated show, which has a different premise; though as with most Marvel adaptions it does have some Ultimate Universe elements incorporated into it.

Tropes used in Ultimate Spider-Man include: