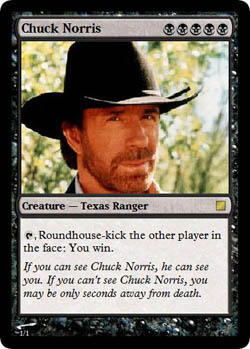 Chuck Norris has power and toughness, but nobody was brave enough to ask for specifics.

A specific form of Memetic Mutation when the fandom of a series exaggerates a character that is simply Badass, and sometimes not at all impressive, to preposterously epic god-like levels. Despite the name, it doesn't necessarily have to be a widely known Internet meme, and is sometimes just an in-joke among the fan-base. In some cases, the writers agree.

Often overlaps with Fan Wank. Fear too the Memetic Molester.

In-universe, this can be the result of being Shrouded in Myth, or a God Mode Sue if done poorly.

When done to a historical character, it's a Historical Badass Upgrade.

Examples of Memetic Badass are listed on these subpages:

Retrieved from "https://allthetropes.org/w/index.php?title=Memetic_Badass&oldid=1789730"
Categories:
Cookies help us deliver our services. By using our services, you agree to our use of cookies.