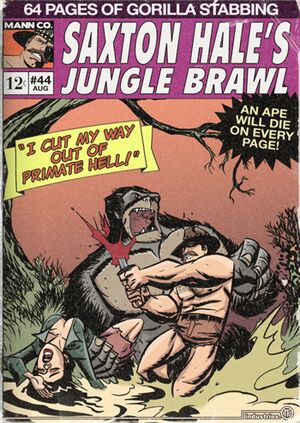 PETA is gonna go apeshit over this.

MANLINESS! Do you have what it takes to be manly in this day and age?! Well, do ya, punk?!

We don't just mean plain old "macho", weaklings! You're on the Internet now, where the truly manly men eat dinosaur bones and razor blades for breakfast, brush their teeth with angle grinders, catch bullets with their furrowed brows, strangle rhinoceri with their mustaches, communicate exclusively with their fists, eat iron and shit a chain, overemphasise their heterosexuality (or Manly Gaiety[1]), juggle flying helicopters, sneeze meteors and belch tornadoes!

This trope is about parodying the concept of "manliness" in an absurd, exaggerated fashion. It is, simply, Badass made silly. The Darwin Awards website uses the term to describe people who died attempting to pull off absurdly masculine stunts—the sort of things that would end up on this trope page. It was even used in the title for one death where a man lopped his own head off with a chainsaw.

Note that, in reality, men with either high or low levels of testosterone are actually more aggressive and violent than those with normal amounts of testosterone. Besides, everyone knows that Real Men Wear Pink.

The Trope Namer was Dr. Helen Caldicott, outspoken campaigner against nuclear weapons and the arms race.

Compare Memetic Badass, Awesomeness Is Volatile. Not to be confused with the actual act of putting self in harms way to prove one's manliness: that one is covered by Macho Masochism (although overlap is common). Also compare Impossible Genius, when it's a character's intelligence rather than their manliness that enables them to do absurd things.

Examples of Testosterone Poisoning include:

Retrieved from "https://allthetropes.org/w/index.php?title=Testosterone_Poisoning&oldid=1876998"
Categories:
Cookies help us deliver our services. By using our services, you agree to our use of cookies.