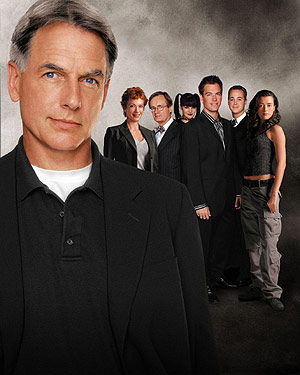 Created by Donald P. Bellisario and Don McGill, NCIS is a spinoff of JAG that leaped on the Forensic Drama bandwagon started by CSI, with some traditional Crime And Punishment and even a bit of Spy Drama thrown in for good measure. NCIS (Navy NCIS for its first season) depicts a team of investigators assigned to deal with criminal activity involving Navy personnel and Marines. That means that the entire gamut of crime -- from Serial Killers to fraud to international espionage to Unauthorized Absences-- can turn up. This particular team is led by Leroy Jethro Gibbs, a retired Marine gunnery sergeant, and contains (surprise!) a rather colorful collection of detectives and lab workers. The series debuted in September 2003 and is still ongoing.

A classic example of a Sleeper Hit, the show was largely ignored at the beginning of its run, but has gained viewers with virtually every season and as of 2012 is the number one scripted drama on network television.

NCIS stands for "Naval Criminal Investigative Service" - like JAG, a real department of the Navy, and also like JAG, less action-packed in real life than the show would imply.

Tropes used in NCIS include:

Abby actually lampshades this in the same episode.

Retrieved from "https://allthetropes.org/w/index.php?title=NCIS&oldid=1885531"
Categories:
Cookies help us deliver our services. By using our services, you agree to our use of cookies.