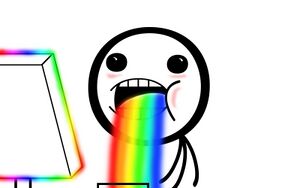 This is an audience reaction to works that are strongly attempting to be kid-friendly — using almost all the tropes of cuteness and idealism, like there's some kind of checklist. 'Saccharine' is the watchword. Viewers react to this with anything ranging from cutesy cuddling to violent revulsion.

Keep in mind that extremely over-the-top lightness is not necessarily a bad thing. With proper usage, it may result in an enjoyable series wherein the cuteness is there as, essentially, an afterthought. It's when it consumes the entire series, when it puts being adorable ahead of things like actual plots or likeable characters, that it becomes a problem.

Not to be confused with Sugar Bowl settings in general, as this is an Audience Reaction trope. Use caution when mixing with Gorn and Crapsack World as Grotesque Cuteness or Wide Eyed Idealism may result, respectively. Repeated consumption of this product may result in becoming a Glurge Addict. Also be aware that excessive cheerfulness can be used to disguise a Crap Saccharine World.

Retrieved from "https://allthetropes.org/w/index.php?title=Tastes_Like_Diabetes&oldid=1946140"
Categories:
Cookies help us deliver our services. By using our services, you agree to our use of cookies.