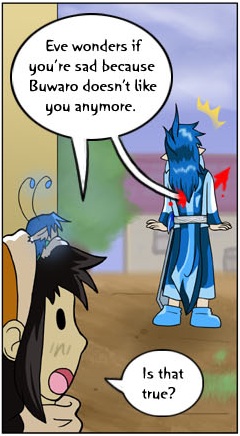 The injury is imaginary, but the pain is very real.

Ever since Socrates, the power of the question to provoke insight has been well acknowledged. This sometimes translates into people using a continued line of questioning to upset or enlighten other characters. Among the most powerful forms of this is finding a single question, formulating it so the answer forces your target to face something difficult to admit, and keep pounding it.

Whether it's The Obi-Wan trying to force his student through a vital lesson, or a villain trying to reduce a hero to a wreck, or a hero trying to show a villain how wrong he's been all this time, or somebody desperately trying to force the kid on the sidelines to realize they are meant to do something....more, the key is to find a question with an answer that cuts close to the bone and not let up.

May involve but is not necessarily related to Armor-Piercing Slap.

The Constantly Curious often comes up with an Armor-Piercing Question in total innocence, being, like many children, Too Dumb to Fool.

This is, in fact, a real technique occasionally used in psychotherapy, education, religious groups, and even debates; it's occasionally known as the "Socratic Method"

Compare Break Them by Talking, Hannibal Lecture, What Is Evil?, The Only Way They Will Learn, Figure It Out Yourself, Koan, Cryptic Conversation. Super-Trope to And Then What?

Examples of Armor-Piercing Question include:

Retrieved from "https://allthetropes.org/w/index.php?title=Armor-Piercing_Question&oldid=1955438"
Categories:
Cookies help us deliver our services. By using our services, you agree to our use of cookies.