Everything About Fiction You Never Wanted to Know.
Jump to navigation Jump to search
/wiki/Peter Jacksoncreator 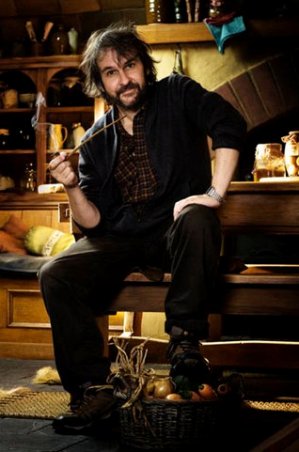 Peter Jackson is a New Zealand director, producer and screenwriter, best known for his hugely successful The Lord of the Rings film trilogy, adapted from the book of the same name. The final movie of the trilogy, The Return of the King, won 11 Academy Awards in 2004, including Best Picture and Best Director. This made him one of only six people to have won Oscars for directing, producing and screenwriting in the same year.

Prior to his work on the trilogy, he already had a cult following for his splatter comedies. In 1994, he received his first Academy Award screenwriting nomination for Heavenly Creatures, based on the 1954 Parker-Hulme murder, committed by two teenage girls in Christchurch, New Zealand. His first big budget movie was The Frighteners, starring Michael J. Fox. Unfortunately, the movie wasn't commercially successful. In 2005, he finally fulfilled his dream to remake the 1933 classic King Kong. In January 2010 he became a Knight Companion of the New Zealand Order of Merit, officially becoming Sir Peter Jackson, and later in June 2012 he became an Additional Member of the Order of New Zealand, New Zealand's highest honour.

He owns his own production company, Wingnut Films, and is a prime mover behind Weta Workshop, the special effects company responsible for The Lord of the Rings, The Chronicles of Narnia, and Avatar.

Peter Jackson is known for his macabre sense of humor, his attention to detail, his dedication to the job and his general playfulness. He is also a noted perfectionist, demanding numerous takes of scenes from different angles. His work often features multiple camera angles and shots, as well as zooming closeups on characters' faces. He is known for using computer enhancement technology and digital special effects. He also likes to make cameo appearances in his films, and others too; for example, he made an uncredited appearance in Hot Fuzz as a knife-wielding Santa Claus.

His studio has also made a fully functional mermaid's tail prosthetic for Nadia Vessey.

He possesses something of a divided fanbase over which of his works are good/better. His early, smaller works from Bad Taste to The Frighteners. Or from Heavenly Creatures to now. Or from The Lord of the Rings to the present.

Despite heavy speculation that he would not be directing the film version of The Hobbit, on 5 October 2010 he was officially given the director's chair.

Works created by Peter Jackson include:
Retrieved from "https://allthetropes.org/w/index.php?title=Peter_Jackson&oldid=1950686"
Categories:
Cookies help us deliver our services. By using our services, you agree to our use of cookies.