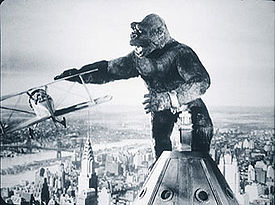 "The Eighth Wonder of the World!"

With those words, RKO Pictures introduced one of the most well-known and enduring movie monsters of all time. "Kong" is a giant gorilla living on a hidden island in the South Pacific. When a charter ship travels to this island, the oversized primate becomes enraptured by the crew's sole blonde woman, whom the island natives offer up to it in sacrifice. The crew rescue the girl and even manage to capture Kong, bringing the creature back to Manhattan for a spectacle. However, Kong escapes and causes mayhem in the streets of New York before being shot off the top of a skyscraper.

There have been three major film adaptations of the original story (along with numerous spin-offs, sequels and cross-overs):

The various permutations of King Kong provide examples of the following tropes:
Retrieved from "https://allthetropes.org/w/index.php?title=King_Kong&oldid=1834455"
Categories:
Cookies help us deliver our services. By using our services, you agree to our use of cookies.