Characters from Super Robot Wars 64 include: 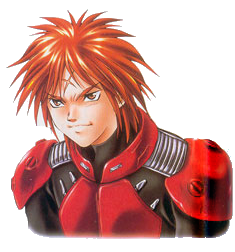 Male protagonist of the super route, Brad's a hot-blooded red-head who fights under the style Bukki-Hakken Ryuu under Master Viror Sunder, as well as rival Katz. He seems to lean more on the idealistic side compared to the more pragmatic Katz. When Viror vanishes alongside with a man riding a Gespenst MK III - HAAAANG ON A MINUTE... - he and Katz swore to continue their master's teaching and join forces with the Londo Bell to free the Earth from alien liberation. However, the two rivals' point of view clashes and they separate.

Brad pilots the Earthgain, the predecessor of Axel Almer's Soulgain. Should the condition meets, it's upgraded into the Super Earthgain, which looks more like Vindel Mauser's Zweizergain. Tropes associated with Brad are: 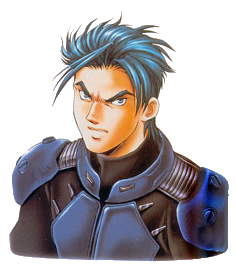 Brad's rival, Katz is the much more pragmatic and believes sacrifices are necessary in order to attain the greater goal. This method of thinking causes him to have conflicts with Brad and ends up defecting to the enemy group. Brad can convince him to rejoin him, otherwise he would die, leaving Brad as the only successor of the Bukki-Hakken Ryuu.

Katz pilots the Virose, the predecessor of the Vysaga, except it uses kicks instead of a katana and many assorted weapons. He gives this to Brad if he dies, and it gets combined into the Super Earthgain. He embodies these tropes: 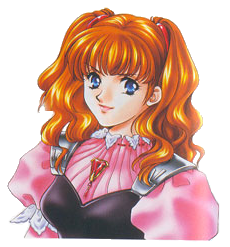 The main heroine for the super Route, Manami's a rich girl who supports the La Resistance of Earth against the alien invasion. She seems to be the leader of her own house, only accompanied by her faithful butler Lawrence and is thoroughly disgusted at how other houses bow their head to the aliens' rule, thus struck out with the machine built by her father, the Simurgh. She later encounters her cousin Aisha riding the Simurgh's partner machine Elbulls and can convince her. The Simurgh and the Elbulls can combine into the Simurgh Splendid, only more focused on melee. She embodies these tropes: 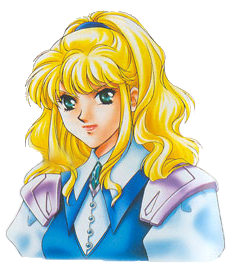 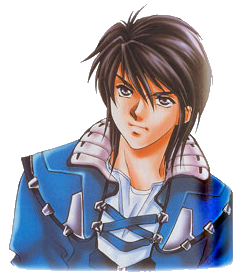 The hero of the real robot route, call "Ark" for short. He's an ordinary teenager who loses his parents in war since he was boy. His story starts with an alien attack on his hometown that kill his uncle. Ark takes shelter in a damaged military warehouse that houses a Super Prototype Soldifar inside, one with a sophicated control system that even he can control. Rescued by La Résistance, Ark decides to help them in return. Ark and his mech associated with these tropes: 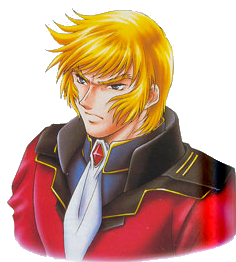 Ark's rival and a member of a special unit known as "Block Breaker". He tries to retrieve the Soldifar with its sister unit Norouz. 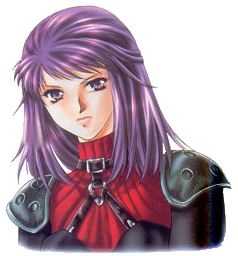 The heroine of real robot route, Selain's an Ace Pilot of the La Résistance who loses her parents since she was a child. After successfully destroying two prototype mecha Svanhild and capturing the third, The Empire crushes her group. Selain manages to survive and take control of the captured Svanhild after her Guntank gets destroyed. Selain acts cold most of time, but she's really a kind person. Selain and her mech associated with these tropes: 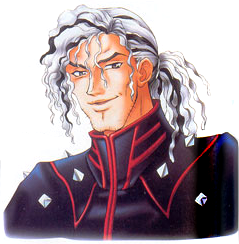 Selain's rival, known as the "Undead Man". He's ordered to retrieve the remaining Svanhild with its sister unit Sigrun. He develops a crush on Selain following their first encounter, and though he can be convinced to join her, Selain never returns his affection. Bummer...

Back to Super Robot Wars 64

Retrieved from "https://allthetropes.org/w/index.php?title=Super_Robot_Wars_64/Characters&oldid=1863383"
Categories:
Cookies help us deliver our services. By using our services, you agree to our use of cookies.