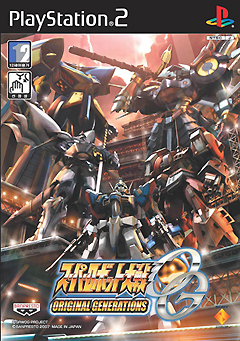 Rock Alright! We'll fly higher than anyone in this eternal sky!

One fine day in Japan, the Super Robot Wars division of Banpresto pondered the following: "Hey, our Humongous Mecha Mega Crossover franchise has developed quite the roster of original characters. What say we, instead of paying out the license fees for Gundam, Macross, Mazinger Z and Getter Robo and the like for this year's game, just build it around our in-house characters and robots instead?"

Thus was born Super Robot Wars Original Generation (OG1), released for the Game Boy Advance. Featuring a couple dozen original pilots created from Super Robot Wars Alpha and prior (but strangely no Masou Kishin entries aside from Masaki Andoh, Lune Zoldark and Shu Shirakawa, although that's all the first Alpha title ever offers), its plot involves the Divine Crusaders War from Super Robot Wars 2 and the initial stages of the Balmar War in Super Robot Wars Alpha, but without all those other distractions provided by the Angels, Zentraedi, Uchuu Kaiju/STMC, and so forth (the United Colony Corps plays the role of The Duchy of Zeon). But wait, you ask: "didn't Alpha have all sorts of corrupt politicians and enemy pilots to impede our heroes Banpresto hasn't made expys of yet?" Well, yes, and they exist now - a good third or so of the Original Generation cast is comprised of these sorts of people (and a couple of the heroes, even) created just for this timeline.

Nearly three years and several mainline SRW games later, Banpresto wheeled out Super Robot Wars Original Generation 2 (OG2) for the Game Boy Advance, which makes the cast EVEN BIGGER with new additions from the interim games. This time around, the plot finishes the part of the Mid-Season Upgrade of the first Alpha game, the Machinery Children of Alpha Gaiden, as well as part of Arado Balanga's story and a prologue of Ibis Douglas' story from Alpha 2, but the primary focus of the story is the Einst of Super Robot Wars Compact 2/Impact, the Shadow-Mirror of Super Robot Wars Advance, and the Inspectors of Super Robot Wars 3. The game also introduces an original plot, combining part of Arado's tale with the story of a character introduced in OG1, as Tyke Bomb ex-students of a harsh training school.

But even THAT wasn't enough, so just before their absorption into Namco Bandai, Banpresto combined both GBA games into a Video Game Remake for the PlayStation 2 called Super Robot Wars OG: Original Generations (OGs) and gave it all the bells and whistles of a full console-sized SRW, plus 7 missions spanning six months between the original games AND an "OG2.5 Unified Wisdom" scenario based on the semi-sequel OVA - both of which introduce EVEN MORE "Banpresto Originals" and sets the stage for Super Robot Wars Original Generation Gaiden (OG Gaiden), a Gaiden Game sequel expanding on the "2.5" missions into an entire story by combining them with the plots of Super Robot Wars Compact 3, Super Robot Wars Reversal and a few characters from Banpresto's earlier The Great Battle series on the Super Famicom. Like the previous games, it also forms a prologue to Super Robot Wars MX.

Oh, and then there's the Gaiden Game spin-off Super Robot Wars OG Saga. The first game, Endless Frontier for the Nintendo DS, is a different beast entirely, since it's a conventional Eastern RPG rather than a Turn-Based Strategy like all of the above, featuring expys upon expys (sometimes, OF expys), an Action Command-based combat system revolving around massive juggling combos (among other things), and KOS-MOS and T-ELOS. For those who played Namco X Capcom, they get to see Reiji Arisu and Xiaomu again; for those who haven't, well... now they have. It takes place in a group of connected worlds called the Endless Frontier, with the lives of the inhabitants shaped by the events of OG2. It's followed by a sequel Endless Frontier EXCEED, which itself has ties to the ending of OG Gaiden, as well as incorporating a couple of characters from the main series. The third OG Saga game is Masou Kishin: Lord of Elemental, a remake of Super Robot Wars Gaiden (technically the first all-original SRW) that (re)incorporates its story into Original Generation canon.

The series has gone full-circle with three Animated Adaptations: a three-part OVA whose events were rolled into OG Gaiden, "Divine Wars", a re-telling of the first game, and "The Inspector", which covers the second game. There is also a manga adaptation: "Record of ATX", which goes through the first game from Kyosuke's point of view.

As of August 2011, nearly 7 years after OG2 was released on the Gameboy Advance, the TRUE non-Gaiden Game, non-remake sequel has been announced. Entitled The Second Super Robot Wars Original Generation, it will be the first SRW to be released on the Play Station 3. According to initial scans, the story will expand the Alpha 2 plotlines of Kusuha Mizuha's and Ibis' into Original Generation, as well as concluding the MX saga. In addition, Joshua Radcliffe and Cliana Rimskaya of Super Robot Wars Destiny, Ariel Org and Duvan Org of Real Robot Regiment and Ing Egret from the Alpha 2 side-story manga Lost Children, and a brand new character (currently enemy), a black haired, black leotard-wearing woman named Aamara, piloting a custom Huckebein, will be the new entrants into the series. From a mecha standpoint, they finally included RyuKoOh and KoRyuOh's brother machines JakuBuOh and BuJakuOh, although who are piloting them remain a mystery. Additionally, the game cover features the RaiOh from Alpha 3, yet a villainous AI-controlled Super Prototype appears, whose objective is the destruction of the other Dynamic General Guardian super robots. Its name? The JinRai.

See here for the massive character sheet on all the originals.

Tropes used in Super Robot Wars Original Generation include:
Retrieved from "https://allthetropes.org/w/index.php?title=Super_Robot_Wars_Original_Generation&oldid=1899346"
Categories:
Cookies help us deliver our services. By using our services, you agree to our use of cookies.