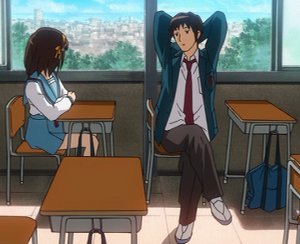 "Just an ordinary day in my ordinary life."

The most common protagonist of a show targeted at teenagers. It's usually discovered they are anything but ordinary—they're reincarnated princesses, or alien princes, or the only ones who can pilot the Humongous Mecha. Or they've been training in an obscure martial art since they could walk. Or they're God. Or they've got something that makes the opposite sex flock to them, and possibly the odd member of their own, whether they want the attention or not. (Parental Abandonment optional)

Then again, there are the true average joes who have something unusual happen to them, and then nothing in their lives is ever the same again.

Look for the kid in the fully open button shirt over a T-shirt, jeans and Converse sneakers—think Ferris Bueller or Ned Bigby.

Retrieved from "https://allthetropes.org/w/index.php?title=Ordinary_High_School_Student&oldid=1886097"
Categories:
Cookies help us deliver our services. By using our services, you agree to our use of cookies.