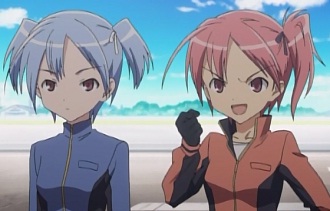 One of these twins is probably enjoying introductions more than the other.

This trope is about two individuals (or occasionally, factions or civilizations) that are significantly linked together somehow (such as through a rivalry, friendship, being siblings, co-workers, competitors, etc.) that have differing personalities and, with it, often different approaches to the world in general, especially whatever they might be competing in/for/over. This, of course, gives them something to butt heads about, since their manner of acting may rub each other the wrong way and each is sure that their way of doing things is right.

By the way, don't get too stuck on the colors in the title. The title refers to a Japanese tradition that gets elaborated a bit later in the article, but it doesn't mean that a character has to dress in or be associated with a particular color in order to fit the role.

Their personalities usually run roughly along the following lines:

The Red Oni is associated with passion, wildness, and defiance. A red oni character is often more brawny than brainy, extroverted, enthusiastic, determined, and filled with a zest for life. He is also much more likely to break conventions and rules than his counterpart. Often an Idiot Hero or, in more mature pieces, a Boisterous Bruiser. If a red oni is indeed noticeably intelligent, he will still be much more emotional than the blue oni and/or with less sophisticated thoughts, feelings, or goals. When a villain, the red oni is often a Blood Knight. Generally speaking, they're more people-oriented than goal-oriented. They may or may not shrug off criticism about themselves or their aims and goals, but say or do something nasty to their closest friends and you've just guaranteed yourself a world of pain. Likely candidate for The McCoy. In terms of character alignment, the red oni tends towards chaotic though this isn't always the case.

The Blue Oni is an opposite in most ways—more intellectual, proud, traditional, introverted, and cultured (sometimes more spiritual, although that's not guaranteed). Blue oni personalities are often respected by others, but also likely to puzzle or confound their peers because they are difficult to read and have a mysterious quality to them. Personality subtypes include The Stoic, The Spock, The Quiet One, and the ever popular Aloof Big Brother. It's worth noting that while blue types appear tremendously calm and composed, sometimes, this is just the surface, and scratching that facade may show that they are, if anything, wound far too tight beneath their calm and unemotional appearance. Villainous blue oni tend to be extremely ruthless, ready to do or sacrifice anything (and often anyone) to accomplish their goals. See Knight Templar and Well-Intentioned Extremist. Likely candidate for The Spock. In terms of character alignment, the blue oni tends towards lawful though this isn't always the case.

If Elemental Powers are present, you can usually expect the red oni to use Playing with Fire or something of a similarly flashy nature, while the blue oni will prefer Making a Splash or possibly be An Ice Person.

There are a lot of ways to play their interactions, so sometimes the two are both leads on an equal standing, sometimes the blue is more of The Smart Guy or The Lancer to the red's Hot Blooded lead. The relationship can also vary wildly, as they are just as likely to be close friends as they are to being bitter rivals or enemies. One thing that is sure is that regardless of how big a cast is, when these two are in it, they will be magnetically drawn to each other.

The name comes from traditional Japanese folklore where Oni (think troll/ogre) usually came in two flavors, a red and a blue. Over time, it's gotten popular to ascribe different qualities and personalities to the two colors. (Think the high-strung Type A personality and the easy-going Type B personality.)

In a show where it's relevant, differences in fighting style may be something like Technician Versus Performer. For example, a red may rush headlong into combat without focus or a plan, while the blue may use cunning traps and strategies, or tend to win in elegant Single-Stroke Battle fashion, or rely on hitting a target with magical powers from a distance instead of running up to their opponent and punching them in the face.

Compare Outside Man, Inside Man, Odd Couple, Cast Calculus (for the evolution of the Red/Blue dynamic through various numbers of ensembles), Tomboy and Girly Girl, Sensitive Guy and Manly Man, and Order Versus Chaos. See also Pink Girl, Blue Boy, Action Duo. Often forms the sidekick section of a Terrible Trio or Three Amigos. If the contrast in personalities between the two actually brings them to blows, you probably have a Tiger Versus Dragon situation.

Examples of Red Oni, Blue Oni are listed on these subpages:

All examples are listed in the red-then-blue order unless otherwise specified.

Retrieved from "https://allthetropes.org/w/index.php?title=Red_Oni,_Blue_Oni&oldid=1932592"
Categories:
Cookies help us deliver our services. By using our services, you agree to our use of cookies.