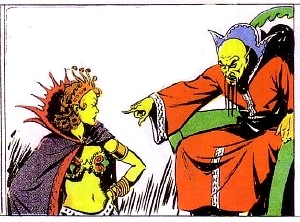 To the Rebellious Princess, being part of the royal family is overrated: You have no control over the path of your life, your responsibilities are numerous and burdensome (or not burdensome enough), you're generally under everyone's thumb, or you're destined to live unhappily in an Arranged Marriage. The only options are to throw off your frilly dress and to run off with the first hero who passes through (in old fashioned stories), or set off for Action Girl adventures on her own on the sly (in the modern ones), making her a royal who actually does something while she's at it.

The Rebellious Princess is usually a teenager, typically brash (since it goes hand in hand with being rebellious), and often blonde and/or has a Tomboyish Ponytail. If she's not the hero, quite often she's the hero's love interest. This will sometimes invoke Marry for Love not only as another way for her to rebel, but to also get out of an Arranged Marriage. Sometimes the Rebellious Princess is the White Magician Girl, but not always: in video games she can also be The Archer, the Black Magician Girl or the Lady of War. May also be a Politically-Active Princess.

Somewhat more common in the earlier days of the RPG genre than they are now; their population has dwindled with the reduced number of games involving monarchies.

The Spear Counterpart is the Rebel Prince. Compare Modest Royalty. For characters a little lower on the social hierarchy, see Spirited Young Lady.

Examples of Rebellious Princess include:

Retrieved from "https://allthetropes.org/w/index.php?title=Rebellious_Princess&oldid=1641212"
Categories:
Cookies help us deliver our services. By using our services, you agree to our use of cookies.