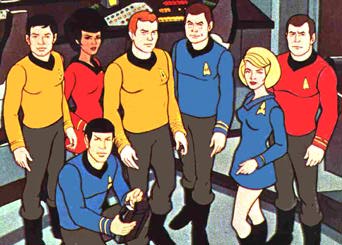 An Animated Adaptation is Exactly What It Says on the Tin: A non-animated work adapted into an animated format.

There was a time when network executives bought into the idea of making animated adaptations for every work under the sun, in order to expand the market of that work to kids, no matter how grossly inappropriate that may have been. In more recent years, people are taking Western Animation more seriously as a storytelling medium, and not as just a way to sell toys. The results are now noticeable, with adaptations that take the prior format and reproduce it successfully into animated form.

Expect it to actually be called "Title: The Animated Series".

For a video game-specific example of this trope, see The Anime of the Game.

Examples of Animated Adaptation include:

Retrieved from "https://allthetropes.org/w/index.php?title=Animated_Adaptation&oldid=1677261"
Categories:
Cookies help us deliver our services. By using our services, you agree to our use of cookies.