Everything About Fiction You Never Wanted to Know.
Jump to navigation Jump to search
/wiki/The WBcreator 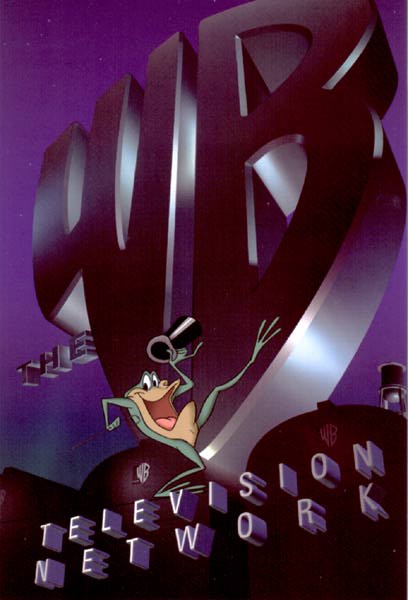 OK, everybody, it's time for a song from the little network with a really big sign!
—Michigan J. Frog at the beginning of a music video promoting the network

A joint venture between Time Warner and Tribune Company. As a reaction to the success of the fledgling FOX network, TW launched their own network in 1995, with Tribune's then-independents (WPIX in New York, KTLA in Los Angeles, WGN in Chicago, etc.) serving as the network's nucleus. This network was rolled up with UPN to form a new network called The CW in 2006, with The WB's final primetime block, A Night Of Farewells And Favorites, airing on September 17, 2006.

The network is remembered differently depending on how old you are. If you were a kid in the mid-'90s, you may fondly remember The WB as the host network for Animaniacs after it was acquired from FOX, along with other Steven Spielberg-helmed Saturday morning cartoons such as Freakazoid! and the Animaniacs spin-off Pinky and The Brain. If you were a kid in the late '90s and early 2000s, you remember it for pretty much selling out Saturday mornings to 4Kids. Those who were teenagers during the late '90s or early 2000s will remember it for giving the world such teen dramas as 7th Heaven, Dawson's Creek, and Everwood -- shows that the network is, without a doubt, most famous for. Still others (teenagers and genre fans alike) remember the network for Buffy the Vampire Slayer and Roswell until those two series were picked up -- perhaps ironically, in hindsight -- by UPN (The WB still held onto Angel at least). And of course, the network churned out quite a bit of Sitcom and particularly Dom Com flavored shows during its life.

And of course, many still remember it for reducing Michigan J. Frog into a cheap corporate shill for the network (to the point where some TV writers referred to The WB as "The Frog") until the frog quietly exited the stage from advertisements and promotions during the last two years of the network's life (though his image was one of the last transmitted by the network; the last thing shown was the end credits of the pilot episode of Dawson's Creek).

Until 2013, The WB existed as an online network, airing both older shows (including most of their old teen dramas) and original programming.

Shows featured on The WB included: