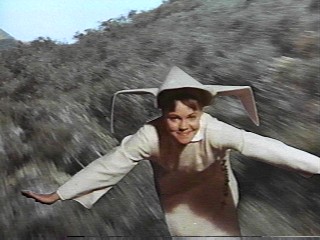 The Flying Nun was a sitcom produced by Screen Gems for ABC based on the book The Fifteenth Pelican, by Tere Rios. The sitcom ran for three seasons, and produced 82 color episodes from 1967 until 1970.

The star was a young Sally Field (post-Gidget), who played the former Elsie Ethrington, a spunky novice nun assigned to the Daughters of Charity convent in Puerto Rico. As a novice, Sister Bertrille (as she was now called) wore a white habit robe with a heavily starched winged cornette.

Due to some Artistic License Physics that beggar Willing Suspension of Disbelief, Sister Bertrille was able to fly in a slight breeze. "When lift plus thrust is greater than load plus drag, anything can fly." And once the breeze caught her cornette...

Every week Sister Bertrille would solve a new problem for the people of San Juan, due to her ability to fly. How this novice can be more effective and nurturing than all the middle-aged experienced nuns at her convent is interesting to note.

It should also be noted that flying amongst nuns is an unusual habit.

Tropes used in The Flying Nun include:
Retrieved from "https://allthetropes.org/w/index.php?title=The_Flying_Nun&oldid=1826341"
Categories:
Cookies help us deliver our services. By using our services, you agree to our use of cookies.